Boris Johnson has admitted he is facing an uphill battle to convince world leaders to put up hard cash and hard commitments to reduce carbon emissions.

Speaking on his way to New York for the UN General Assembly Summit, the prime minister conceded he had a 40% chance of failure in securing the $100bn he needs in financial pledges from rich nations to help developing countries go green by the critical COP26 climate change summit in November.

“I think getting it all [the commitments] this week is going to be a stretch.

“But I think getting it done by COP – 6 out of 10. It’s going to be tough. People need to understand this is crucial for the world.

“By the end of October, countries are going to have to come up with bigger NDCs [nationally determined contributions] and showing what they’re going to do to cut CO2 emissions, not just by 2050 but by 2030 to show that we can make progress and we have a real plan to restrain the increase in temperatures to 1.5 degrees.”

Climate change will top Mr Johnson’s agenda as he meets world leaders at the annual UN gathering in New York.

He will also travel to the White House for a bilateral meeting with President Joe Biden as the two men look to put their differences behind them over the chaotic withdrawal from Afghanistan and work on their common agenda of tackling climate change.

But the prime minister, who has made tackling climate change a key goal of his administration, also admitted that he was once a sceptic as he defended his new trade secretary Anne Marie Trevelyan who a decade ago had claimed the world “was not getting hotter” and “global warming isn’t actually happening”.

“No one can fault the UK government for what we’re doing to tackle climate change. We’re world leaders and most impartial observers think we’re far, far ahead of the pack,” the PM said.

“I don’t want to encourage you, but if you were to excavate some of my articles from 20 years ago you might find comments made obiter dicta [Latin for past remarks] about climate change that weren’t entirely supportive of the current struggle. 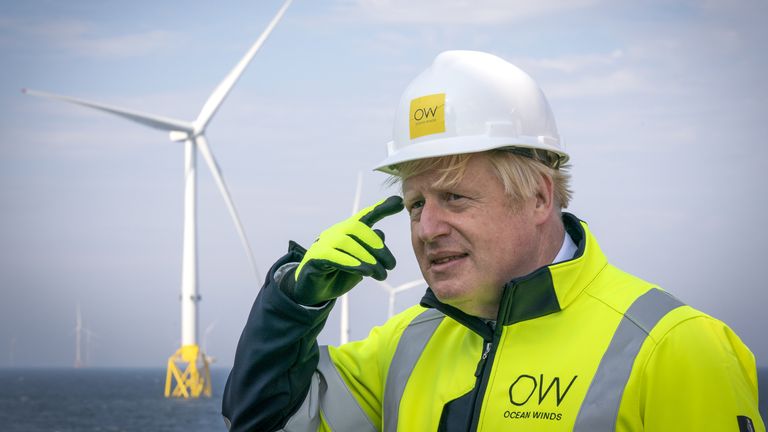 But his first foreign trip in 18 months will not be, by the prime minister’s own admission, an easy task.

While the UNGA has been billed by officials as “an important staging post” on the road to the COP26 global summit, whether Mr Johnson can galvanise fellow leaders to commit to and fund climate targets, is another matter.

COP26 is the moment when every country is supposed to outline a detailed and highly-ambitious plan to achieve specific emission reduction target to deliver the 2015 Paris Agreement’s commitment of limiting global warming to 1.5 degrees above pre-industrial levels by the end of this century.

“Some countries are really stepping up to the plate. Others, some G20 countries, need to do much more,” he said en route to New York. He will want to press big G20 carbon emitters – China, Indonesia – to go faster on reducing emissions.

Relations have also been strained by the new trilateral security partnership between the US, Australia and the UK, announced last week, which will see Australia buy nuclear submarines from the US.

Subscribe to ClimateCast on Spotify, Apple Podcasts, or Spreaker

Beijing is angry over what it sees as an act of aggression in the Indo-Pacific, while Paris is furious to be blindsided by three allies in a deal that resulted in Australia cancelling a multibillion euro contract for French submarines.

Ahead of UNGA, the prime minister sought to reassure Beijing and Paris that AUKUS [as the new pact is known] “shouldn’t be construed as being remotely hostile to anybody”.

It’s about sharing tech, it’s about working together with countries that share values… I don’t believe it needs to be seen in a zero sum way.”

He also sought to ameliorate a fuming President Macron, telling journalists on the plane to New York, that the UK was “very proud of our relationship with France and it is of huge importance to this country”.

But the government can’t even guarantee that China’s President Xi Jinping will even attend the COP26 summit in November.

The Prime Minister insisted on Sunday that China has “gone a long way already” in getting to net zero in 2060, but allies are clear that it must, along with other G20 carbon emitting countries, such as Indonesia, go faster in reducing emissions.

Mr Johnson will kick off the UNGA summit this morning with a number of leaders from what the government describes as “climate vulnerable” countries – Bangladesh, Maldives and Barbados – whose very existence is under threat from global warming and rising sea levels. “If these countries don’t feel COP is working for them, then it won’t be working full-stop, so Monday has been convened with the UN Secretary General Antonio Guterres to hear from a lot of these countries and to demonstrate to them – in particular through calling for the $100bn fund – that we have their backs.”

Aside from hard cash, the PM will also use UNGA to implore Brazilian President Jair Bolsanaro to halt the burning of the Amazon rainforests.

“We want to stop and reverse the global loss of biodiversity, including the rainforest,” Mr Johnson added.

“I believe it is in the long-term economic interest of all rainforest countries to do that. We want to plant gazillions of trees, hundreds of millions of hectares. “We want a global process of reforestation. I think it is in the long-term interests of Brazil and the people of Brazil to recognise the spectacular natural endowment they have and to conserve it and I am sure that President Bolsanaro will agree.”

Three days, a dozen or more bilateral meetings, round-tables and a trip to Washington for an audience with the President, Mr Johnson will hope he can come away with some firmed up commitments ahead of the COP26 summit.

Billed as the world’s last chance to tackle runaway climate breakdown, the next few days are one of the PM’s final chances to get fellow leaders to give hard cash and hard commitments to tackle global warming.

Tags: admits, Boris, COP26:, it, JOHNSON
You may also like
Recent News: