A married couple from Virginia who illegally entered the Capitol on Jan. 6 with a protest sign questioning coronavirus vaccines pleaded guilty on Monday to a misdemeanor charge of disorderly conduct, becoming the first two people charged with minor crimes to accept responsibility for their role in the assault on the building that day.

Under an agreement with the government, the couple — Jessica and Joshua Bustle of Bristow, Va. — could be sentenced to as little as no prison time to six months in prison, a range that could serve as a bellwether for more than 200 other defendants facing only misdemeanor charges. Prosecutors did not make a sentencing recommendation for the Bustles, who also agreed to each pay $500 in restitution, their small part in defraying the estimated $1.4 million in damage that was inflicted on the Capitol.

In the coming weeks, as more of the nearly 500 people arrested in connection with the attack plead guilty under deals with the government, prosecutors will reveal potential sentences for several broad categories of defendants, teasing out what could be seen as the penalty market for the riot.

The plea agreements, while in writing, are not binding on judges, who have the final say in how much time defendants will serve.

At a hearing in Federal District Court in Washington, the Bustles acknowledged illegally entering the Capitol carrying a sign that read, “VACCINE INJURY is the REAL PANDEMIC,” in violation of a law that forbids “parading, demonstrating or picketing” in the building.

Prosecutors say that before she and her husband entered the Capitol, Ms. Bustle, 36, posted a picture of herself on Facebook in a knit cap with a logo reading, “Lions Not Sheep.” The caption read: “We don’t win this thing sitting on the sidelines. Excited to stand for truth with my fellow patriots and freedom fighters in DC today. Lessss do this.”

Later in the day, prosecutors say, Ms. Bustle posted another Facebook message attacking Vice President Mike Pence for not stepping in to stop the certification of the Electoral College vote — a power he did not in fact possess. “Pence is a traitor,” she wrote. “We stormed the Capitol.”

At the hearing, Ms. Bustle told Judge Thomas F. Hogan that she had also written “kind” things on Facebook, including posts that expressed her desire for people to “pray for America.” 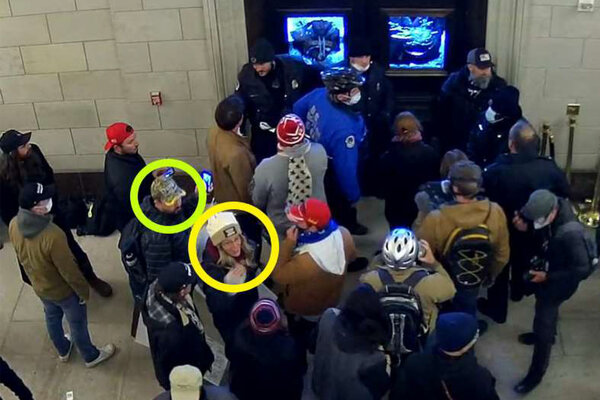 The investigation into the Jan. 6 riot is both the largest and one of the most complex that the Justice Department has ever undertaken. From the start, prosecutors have struggled to mete out justice on an individual level while trying to enforce accountability for the often intersecting actions of the mob.

Defense lawyers have tried a host of tactics for their clients. Some have asked to move the cases out of Washington, claiming that the city’s largely Democratic population cannot provide a fair jury pool. Others have attacked the viability of widely charged crimes, saying that some of the statutes have been wrongly applied.

Earlier this month, a defendant in another bellwether case, Paul A. Hodgkins, pleaded guilty to a single felony charge of obstructing the certification of the presidential vote by breaching the Senate floor with an angry pro-Trump mob. Under the terms of his deal with the government, Mr. Hodgkins, a 38-year-old crane operator from Florida, agreed to a sentence of 15 to 21 months in prison. He also agreed to pay $2,000 in restitution.

The obstruction count that Mr. Hodgkins pleaded to is one of the most broadly charged crimes in the riot and placed him somewhere near the middle of the spectrum of defendants, in between those who merely trespassed on the building and those who broke in with a weapon or attacked police officers.

Last week, a lawyer for Douglas Jensen, a QAnon believer accused of carrying a knife while leading the mob in an early charge against the Capitol Police, estimated in a court filing that his client could face 41 to 51 months in prison if he pleaded guilty. Prosecutors recommended the same range in April for Jon Ryan Schaffer, a member of the Oath Keepers militia who acknowledged storming the building with a canister of bear spray in a plea deal that called for him to cooperate with investigators.

At this point, none of the more than 100 people charged with assaulting officers at the Capitol have formally pleaded guilty, though prosecutors have said in recent hearings that they have been negotiating deals with some defendants who attacked the police. Police assaults can in theory carry up to eight years in prison — and significantly more if a weapon was involved.

Crafting federal sentencing recommendations for assault can be complicated, depending on factors like the defendant’s criminal history and the severity of the victims’ injuries. The sentences for assaults at the Capitol are likely to be even harder to determine given that many of the attacks involved multiple assailants who did different things and, even though they worked together, bear different levels of culpability.

Prosecutors have not yet taken guilty pleas or made sentencing recommendations for any of the 30 or so people charged in conspiracy indictments with planning the attack on the Capitol before Jan. 6. Most of those defendants are connected to extremist organizations like the Oath Keepers, the far-right nationalist group the Proud Boys or the Three Percenters, a radical gun-rights movement.

At least one more guilty plea has been scheduled for this week in the case of Anna Morgan-Lloyd, an Indiana woman who illegally entered the Capitol with her friend Dona Sue Bissey. One day after the riot, Ms. Bissey, who owns a hair establishment called the Hothead Salon, posted pictures on Facebook of being in Washington on Jan. 6. Ms. Morgan-Lloyd responded, “That was the most exciting day of my life.”

In an unusual move, Ms. Morgan-Lloyd waived the preparation of a presentencing report, a process that generally takes weeks or months. Judge Royce Lamberth is expected to take her guilty plea and issue her sentence at a hearing on Friday. If the proceeding goes as planned, Ms. Morgan-Lloyd will be the first defendant to be formally sentenced in connection with the Capitol attack.

Tags: Storming of the US Capitol (Ja
You may also like
Recent News: