Standing near Ms. Simon as they waited to catch a glimpse of Joseph R. Biden Jr. in nearby Latrobe recently, Mike Sherback, 55, said that he, too, was not typically outspoken about his political views. The two cited the vocal Trump supporters in their conservative communities who sometimes shout down dissenters.

“The Biden supporters don’t like to come out as Trump supporters do,” Mr. Sherback said. “Usually I wouldn’t do this, either. But it’s the biggest election in my lifetime. He needs the support because the Trump people, Trump supporters, show their support whether through radical ways or not.”

As a divisive presidential campaign enters the final stretch, there is evidence that some Democrats deep in Trump country — the kind of voters who avoided political discussions with their neighbors, tried to ignore Facebook debates and in some cases, sat out the last election — suddenly aren’t feeling so shy. It’s a surge in enthusiasm that reflects the urgency of the election for Democrats desperate to oust President Trump, one that could have significant implications for turnout in closely fought battleground states that the president won in 2016.

No one expects Westmoreland County, which includes Latrobe and Scottdale, to flip to Democratic control after Mr. Trump won it by more than 30 percentage points in 2016. And no one doubts the passion of the president’s supporters in counties like this across Pennsylvania and the Industrial Midwest.

The question is whether Democrats in counties like Westmoreland are engaged enough this year to prevent Mr. Trump from recreating his overwhelming 2016 margins of victory in white working-class areas, the kind of support that compensated for his losses in cities and suburbs elsewhere last time. If Mr. Biden can reduce Mr. Trump’s support in these regions while producing even bigger numbers in the suburbs and cities than Mrs. Clinton did in 2016, Mr. Trump’s path becomes all the more difficult.

“Even if we just cut the margin,” Mr. Biden said on his recent train tour through eastern Ohio and western Pennsylvania, “it makes a gigantic difference.” 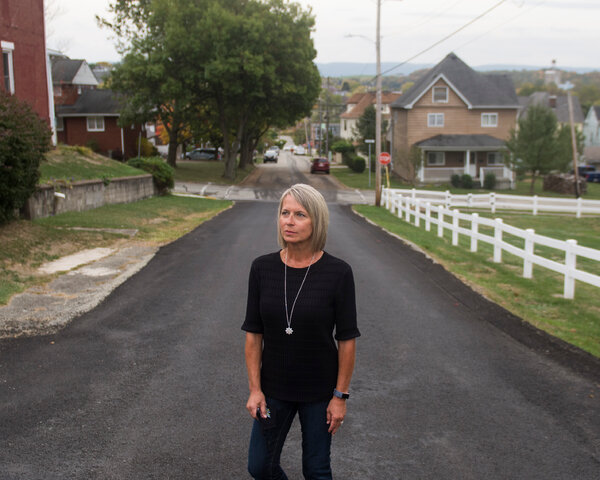 The extent to which Mr. Biden can achieve that goal is uncertain in a highly polarized environment, amid plenty of evidence that Mr. Trump’s supporters in these areas have only grown more committed. But pollsters, Democrats and some Republicans on the ground say there are also unmistakable signs of more Democratic energy this year — even in “the belly of the beast,” as Ms. Simon put it — compared with 2016.

“Among those who didn’t show up in Pennsylvania, they were two-to-one Clinton supporters,” said Patrick Murray, director of the Monmouth University Polling Institute. “What we’re seeing right now is not the same lack of enthusiasm.”

“Many of these so-called shy Biden voters, who haven’t been talking about it before, are also the voters, the Democratic voters, who stayed home four years ago and now regret it,” he added.

A Monmouth poll of registered voters in Pennsylvania last week showed that Mr. Trump’s lead among white voters without a college degree had fallen from 22 points in early September to just nine points this month, suggesting that Mr. Biden was cutting into a demographic that is crucial to the president’s hopes of winning re-election. Multiple recent polls have found Mr. Trump’s standing with those voters down compared with his 2016 result in Pennsylvania.

Mr. Biden has been working aggressively to engage just those voters — and to court their neighbors who feel uneasy about their past support of Mr. Trump. On Saturday, he campaigned in Erie, Pa., in a county that supported Mr. Trump after going for President Obama and Mr. Biden in 2012. On Monday he was set to visit Ohio, a state that some Democrats have spent the past four years writing off but that polls show may now be up for grabs.

And his train tour after the first debate took him through parts of Ohio and Pennsylvania that are closely associated with disillusioned Democrats and committed Trump voters.

His first stop after launching the tour in Cleveland was Alliance, Ohio, where the Republican mayor, Alan C. Andreani, described seeing “as many Biden signs as Trump signs, Biden flags with Trump flags.”

“We seldom get as many signs as we see right now,” said Mr. Andreani, who declined to say how he would vote. On both sides, he said, “a lot of people are engaged.”

Yard signs, while far from definitive, can offer a snapshot of enthusiasm, as they did in 2016, when rural areas of key battleground states were blanketed with Trump signs. And in a deeply partisan area, they can function as part of a permission structure, of sorts — encouragement for others, in this case Biden supporters, to speak up.

“With an older population, it’s a way of making people feel connected,” said JoAnn Seabol, 70, who coordinates volunteers for the Westmoreland County Democratic Party. “Sometimes they’re surprised by their neighbors, when they see them also put out a Biden sign.”

And when signs are stolen off lawns — which has happened regularly this year, on both sides, as partisan emotions run high — “it’s making Biden supporters more angry and more determined,” Ms. Seabol said, as she sat behind a desk at the Democratic office in Greensburg, Pa.

Rochelle Thompson, 68, said she drove over to the office because her neighbor’s Biden sign had been stolen. She described her neighborhood as “very Trumpy” and said that political discussions could be tense.

But Ms. Thompson also said she was seeing more Democrats publicly airing their views this year than they did in 2016.

“More people are being vocal because they’re really sick of what’s been happening the last four years,” she said. “I’m thinking more people are going to vote Biden than they’re saying.”

A Monmouth poll of Pennsylvania from over the summer found that 57 percent of voters surveyed believed that there was a “secret” Trump vote after the president’s unexpected victory in the state in 2016. But in Trump counties, 32 percent of voters also expressed a belief in a “secret” Biden vote.

In interviews, a number of Democrats in Westmoreland described being reluctant to make their views known in their communities, because they are greatly outnumbered and are reluctant to argue with neighbors, just as some conservatives in big cities or on some liberal college campuses tend to keep their views to themselves.

“We’re biding our time till Election Day,” Rich Seanor, 67, a Biden supporter who works at a liquor store, said as he finished a shopping trip at an Aldi grocery store in Greensburg. “Then we’ll be loud.”

About 10 miles away, in the Latrobe area, Republicans who had made the pilgrimage to a place called the Trump House felt no such reservations about speaking their minds. A mixture of Pennsylvanians and tourists from as far as Florida and Colorado milled around the yard and porch of a converted farmhouse painted to look like an American flag. The spot was designed to be a grass-roots, pro-Trump gathering place, said Leslie Rossi, the owner.

There, she distributes free Trump paraphernalia alongside voting information, and encourages people to change voter registrations and sign up as Republicans.

“Biden can’t get 100 people a day at a rally,” she said from the porch there, hours before Mr. Trump would announce his positive test for the coronavirus. “I get a thousand people a day.”

“The polls are wrong,” she added, “because of what I’m seeing here.”

Representative Guy Reschenthaler, the Republican congressman in the area, said in an interview that he was skeptical that Mr. Biden would do any better in rural areas than Hillary Clinton had, arguing that there was even more enthusiasm for Mr. Trump among Republicans who had doubted him four years ago.

Mr. Reschenthaler cited in particular Mr. Trump’s support for the oil and gas industry and his calls for “law and order” in response to civil unrest.

“Our base wasn’t as excited in 2016 as they are now,” he said. “So I’m actually seeing more excitement from the Republican base for the president in 2020.”

Yet Republican and Democratic energy are not mutually exclusive.

John Petrarca, 61, of Latrobe, served as a Trump delegate to the Republican National Convention in 2016 and agreed that Republicans in his area had only grown more supportive of the president. But in an interview outside the Trump House, Mr. Petrarca said that he was seeing more signs of Democratic activity in the area, too, pointing to Biden advertisements and signs. He didn’t doubt the enthusiasm of some Democrats in the area, he said, noting, “This isn’t Alabama.”

“Biden put more effort into the area this time than Clinton, more money, I’ve seen more ads, signs — I didn’t see Hillary Clinton signs,” he said. “It’s how, like, a Republican would be when Obama was in office. People aren’t afraid to put their signs up because this election is so important to both sides.”

President Trump will hold a rally in Florida and Joe Biden will campaign in Ohio as the confirmation hearings for Judge Amy Coney Barrett get underway. Read live updates.