Rallying supporters in the Savannah area, the two Democratic candidates made clear that their task in Tuesday’s races remains daunting in a state where Republican power remains strong, despite President Trump’s narrow loss in the November general election. While Democratic officials have been heartened by strong numbers in the early voting period among traditionally left-leaning voters — particularly Black voters who made up a greater share of the electorate than in the presidential election — they said the party would still be reliant on robust in-person voter turnout.

In several states in November, including Florida and Texas, Democrats recorded big leads through early voting and absentee ballots, only to have them erased on Election Day.

In Georgia, the Democratic Senate candidates, Jon Ossoff and the Rev. Raphael Warnock, are challenging two Republican incumbent senators, David Perdue and Kelly Loeffler. The outcome will determine which party controls the Senate. Georgia Democrats believe that an influx of new voters and a fractured Republican electorate could allow Democrats at the Senate level to match President-elect Joseph R. Biden Jr.’s success. 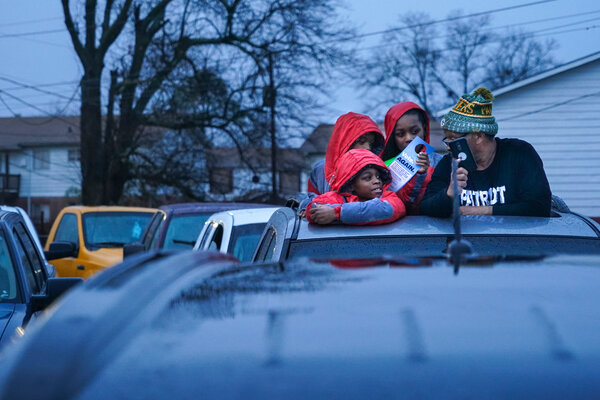 “We have to turn out in such numbers that there’s no question about who the winners are,” Mayor Keisha Lance Bottoms of Atlanta said in Garden City on Sunday. “While we had a record turnout of five million people, almost one million African-American voters stayed at home. That’s one million too many.”

The remarkable barrage of last-minute attention underscores the towering stakes of the two runoff races, which will reach their climax at a time of high national drama and highly aberrant behavior by the president and his party, who continue to seek ways to reverse Mr. Trump’s loss in Georgia.

On Sunday afternoon, an audio recording emerged of a phone call Mr. Trump conducted the day before with Brad Raffensperger, Georgia’s Republican secretary of state. In the recording, first reported by The Washington Post, Mr. Trump unsuccessfully tried to persuade Mr. Raffensperger to “find” enough votes to overturn the Georgia results in the president’s favor. As he has on many occasions, the president made the baseless claim that his loss in the state, by roughly 12,000 votes, was the result of electoral fraud. Mr. Raffensperger refused to change the results.

Democrats were quick to criticize both the president and the Republican senators who have taken great pains to portray themselves as his champions. “That is a direct attack on our democracy, and if David Perdue and Kelly Loeffler had one piece of steel in their spines, one shred of integrity, they would be out here defending Georgia voters from that kind of assault,” Mr. Ossoff said at the afternoon rally near Savannah.

Ms. Harris, who spoke afterward, said: “Have y’all heard about that recorded conversation?” adding that “it was certainly the voice of desperation” and calling it a “bold abuse of power by the president of the United States.”

The call also raised new questions about how much Mr. Trump would focus during his rally on Monday in Dalton, Ga., on his unsubstantiated claims of electoral fraud, at the expense of the message that Republicans still need to turn out for the runoffs.

Mr. Ossoff, the head of a video production company, is challenging Mr. Perdue, a former business executive who is quarantining because of possible exposure to the coronavirus. Mr. Warnock, the pastor of Ebenezer Baptist Church in Atlanta, where the Rev. Dr. Martin Luther King Jr. once preached, is running against Ms. Loeffler, a wealthy businesswoman.

Both Mr. Warnock and Mr. Ossoff joined Ms. Harris at the rally on Sunday outside Savannah, where Mr. Warnock was born and raised.

Savannah, founded in 1733, is Georgia’s oldest city, and arguably its most beautiful and beguiling. In statewide races, it can sometimes seem like a political afterthought, given its relatively small size compared with metropolitan Atlanta.

But there are good reasons that Savannah enjoyed a turn in the spotlight two days before Election Day. Chatham County, population 290,000, has long been a reliable Democratic stronghold, anchored by Savannah and its African-American majority. Enthusiasm among Democrats in the county surged significantly in November, when Mr. Biden’s vote total surpassed Hillary Clinton’s in 2016 by nearly 16,000 votes.

But a county-by-county breakdown of early voting, which ended last week, shows Chatham County lagged behind larger Democratic-leaning counties like Fulton and DeKalb in turnout, according to the website georgiavotes.com.

Mr. Biden is planning to hold his rally on Monday in the Atlanta area. Mr. Trump’s decision to hold his rally in Dalton, a city in northwest Georgia, is most likely a response to the fact that early voting turnout was relatively light in that region.

Mr. Pence is planning to visit Rock Springs Church in Milner, Ga., on Monday. Mr. Perdue has described the pastor of the church, Dr. Benny Tate, as his “personal pastor” and a close friend.

On Sunday afternoon, Ms. Loeffler spoke from the bed of a pickup truck in McDonough, Ga., along with Gov. Kristi Noem of South Dakota. “Are you ready to keep fighting for President Trump?” Ms. Loeffler asked, warning darkly of a socialist takeover of the nation if Democrats gained control of the Senate.

Ms. Loeffler also repeatedly reminded the crowd to vote — and to spread the word among friends and family.

“Five calls a day keeps the liberals away,” she said.

The runoff elections will take place one day before a meeting of Congress to ratify the results of the presidential election. That vote is typically a perfunctory exercise but this year has become an explosive drama, with 11 senators and senators-elect stating that they will vote to reject Mr. Biden’s victory. Mr. Pence has signaled his support for the effort, which is based on vague and unsupported claims of potential electoral fraud.

Mr. Perdue cannot vote on Wednesday because, in an odd quirk stemming from Georgia’s runoff requirements, his Senate term ended on Sunday. The vacancy will not be filled until the results of his election are certified by the Georgia secretary of state.

Ms. Loeffler has been noncommittal on how she might vote, despite her otherwise unwavering support of Mr. Trump. Her appearance with Ms. Noem in McDonough, a suburb south of Atlanta, was possibly part of a broader effort to make a last-minute appeal to suburban women, many of whom have been unenthusiastic about Mr. Trump over the last four years.

In the last few days, a political action committee called Georgia Balance has emerged, spending $2.5 million targeting Georgians who voted for Mr. Biden but fear full Democratic control of Congress. The group has released an online video ad in which a white woman in a well-appointed kitchen identifies herself as a Georgian, a mother of three — and a Biden voter. “In the Senate runoff, I’m voting for David and Kelly,” the woman says. “We just need to take a breath. America needs balance.”

During a canvassing launch event in Savannah on Sunday morning, Mr. Ossoff told volunteers that the election could come down to areas outside Atlanta, where Mr. Biden benefited from a surge of support in November.

“Georgia voters can set the tone for the next decade of American history,” Mr. Ossoff said. “Are you ready to work? Victory is there. We’re on the cusp of making history.”

The Black voters who filled the crowds at Mr. Ossoff’s events on Saturday and Sunday said the factors that turned Georgia from reliably red into a competitive battleground were not only political but also societal.

An influx of younger residents has reshaped communities. In urban areas of the state beyond Atlanta, like Macon and Savannah, a rising multicultural tide of immigrants and new arrivals has created new pressure points in local politics, said local organizers and elected officials.

“I always thought it was possible Georgia could go blue, but I didn’t expect it would be this soon,” said Hope Joseph, a 55-year-old resident of Savannah. “But people right now just feel fed up.”

“They’re going to block everything President Biden tries to do, too,” Ms. Carver said. “And we know with this election, we can have preserved some of President Obama’s legacy as well.”

Tags: GEORGIA, Jon Ossof, Senate races
You may also like
Recent News:
This website uses cookies to improve your user experience and to provide you with advertisements that are relevant to your interests. By continuing to browse the site you are agreeing to our use of cookies.Ok