Writing on Twitter, the GB News presenter and Brexiteer pointed out that the former Chancellor’s idea was hardly novel. The former Liberal Democrat activist claimed that negotiations to resolve issues surrounding the Northern Ireland Protocol had been ongoing for “years”.

Mr Grimes also implicitly referred to the long drawn-out negotiations between London and Brussels to finalise the UK’s departure from the bloc between 2017 and 2019.

He said: “Negotiations with the EU?

“Why hasn’t anybody considered this before now?!

“Oh wait, they have. 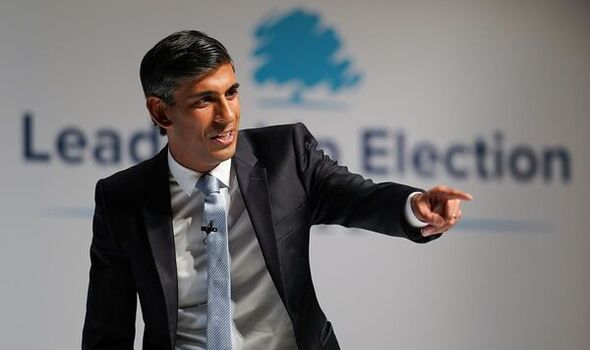 The Northern Ireland Protocol, which came into force early in 2021, created special trading arrangements for the province.

In order to avoid a “hard border” between Ulster and the Republic of Ireland, the Protocol agreed that any goods travelling from Great Britain will be checked at Northern Irish ports.

The move prevented such checks from taking place on the Emerald Isle’s land border, which was seen as an unworkable arrangement given political sensitives and the extensive amount of cross-border traffic.

As the UK is also outside the European Union’s single market, checks need to take place on arrival in Northern Ireland to ensure that goods meet the EU’s regulatory standards before they enter the Republic of Ireland.

However, these arrangements have attracted fury from loyalists and unionists in Northern Ireland who claim it is effectively creating an “invisible border” between Great Britain and Ulster down the Irish Sea.

They argue that it effectively keeps Northern Ireland in the single market and means that the province is treated differently from the rest of the UK.

Writing in the Belfast Telegraph, Mr Sunak argued that he could “fix” the issue of the Protocol by reopening dialogue with Brussels.

He said: ” I am an experienced international negotiator.

“I will bring the contacts and know-how to I gained from that to the negotiation.”

The Richmond MP added that he would “push the EU to come to the table once more”, arguing that it would be quicker than waiting for the Northern Ireland Protocol Bill which overrides parts of the agreement to be passed into law.

Mr Sunak reiterated his position when speaking to The Times.

He said: “The Bill that’s in Parliament is one that I support, that will address them, but it will take time.

“So I hope as the new Prime Minister I can sit down and have a constructive relationship with the Irish, French and European governments to make sure we can try and see if we can find a constructive solution to this problem.”