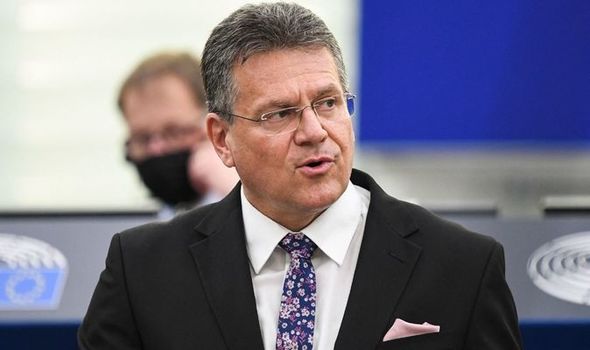 The UK’s Foreign Secretary and her EU counterpart issued a joint statement following further “constructive” talks in Brussels today (Monday). Officials from both sides will meet again later this week, with Ms Truss and Mr Sefcovic “taking stock” next week. The statement added the EU-UK Joint Committee will also meet again next month.

Thisd would be the first time panel, which was established to oversee the implementation and application of the Brexit deal between both sides,will have met since June.

Both Ms Truss and Mr Sefcovic “reaffirmed their shared desire for a positive EU-UK relationship underpinned by our shared belief in freedom and democracy, and co-operation on common global challenges”.

He tweeted: “Sefcovic says in meeting with Liz Truss he told her to stay ‘laser focused’ on issues important to NI, such as movement of goods and customs formalities.

“‘If political goodwill is maintained, could lead to a timely agreement on durable solutions’.”

“The meeting took place in a constructive atmosphere with the aim to advance the talks.

“They agreed that officials would meet again this week, with the Principals taking stock at political level next week.

“They also agreed that the EU-UK Joint Committee would meet in the course of February.

“They reaffirmed their shared desire for a positive EU-UK relationship underpinned by our shared belief in freedom and democracy and cooperation on common global challenges.”

On Sunday, Ms Truss had called for “practical solutions” to end the stalemate with the EU over the Northern Ireland Protocol.

In a statement ahead of the talks with Mr Sefcovic in Brussels on Monday, she said: “Fundamentally this is about peace and stability in Northern Ireland.

“Whether you voted Leave or Remain, represent the UK or EU, the focus must be on protecting the Belfast Good Friday Agreement and fixing the protocol.

“Rather than re-running past arguments, we need to focus on delivering for the people of Northern Ireland, finding practical solutions to problems on the ground and maintaining the integrity of the United Kingdom.”