A host of EU capitals have expressed concern over a clause in the bloc’s contract with pharmaceutical giant Johnson & Johnson that means most vaccines made in Europe must be sent to the US for bottling. The European Commission was said to have reassured governments but insiders fear doses will not be returned to member states because Washington has an export ban in place. And diplomats and officials believe this could have serious repercussions for Brussels’ plan to have 70 percent of all adults vaccinated by September 21..

The EU could be in a position where they have sent 70 percent of J&J vaccines to the US to fulfil a contract requirement and the doses are then unable to return due to a US export ban.

One insider told Express.co.uk that it would be “difficult” to hit the target without supplies of the J&J vaccine because of the shortfalls of the AstraZeneca jab.

A second source claimed the Commission had attempted to reassure member states that the issue would not impact vaccination targets.

But the diplomat added: “We’re not sure whether production shortfalls in the US may have some adverse effect on this.” 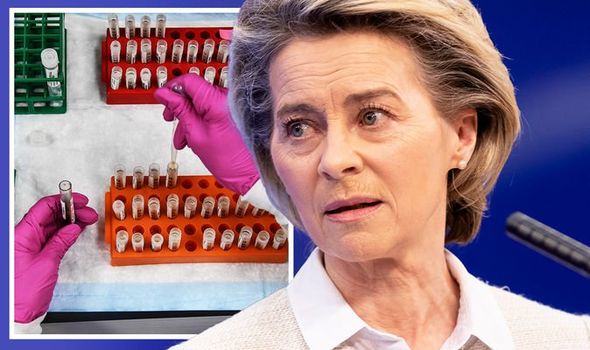 The J&J jab is seen as a crucial pillar of the bloc’s mass vaccination rollout because it is easy to store and only requires one dose.

The US drugs giant was due to deliver 55 million shots to EU member states by  June but has since slashed it’s shipping forecasts.

They said: “The upcoming vaccine from Johnson & Johnson may be a potential game-changer due to easier storage and transport as well as the requirement of only one dose.

“However, we have been informed about the fact that the Johnson & Johnson vaccine apparently needs to be shipped to the US for filling and finish.

“If this could risk EU access to the vaccines, we should consider addressing the issue already now with a view to finding solutions with the company in order to safeguard European supplies.”

They are set to raise the issue next week at a summit of European leaders in Brussels, where they are due to discuss the bloc’s vaccine crisis.

Christoph Krupp accused Washington of triggering politically-induced bottlenecks in the supply chains of the AstraZeneca and J&J immunisations.

“We all believe in free world trade. But the global supply relationships do not all run as they should,” he said.

Despite the looming J&J crisis, the EU27 are expected to double down with their attacks on AstraZeneca.

Mr Kurz, as well as the leaders of Croatia, Slovenia and the Czech Republic, today met with European Council President Charles Michel to raise concerns over the supply of jabs.

An EU official said: “Leaders shared their concerns with the President on possible gaps in the vaccine distribution between member states following the fact that one company has not respected its commitment.”