The administration made a last-ditch, failed appeal to Congress to extend the moratorium to buy more time to fix a dysfunctional rental aid program. 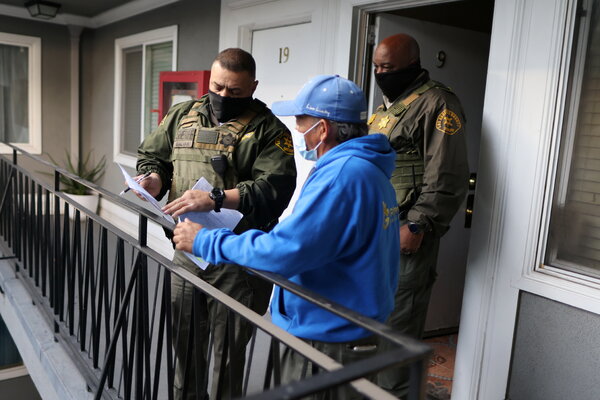 A nationwide moratorium on residential evictions is set to expire on Saturday after a last-minute effort by the Biden administration to win an extension failed, putting hundreds of thousands of tenants at risk of losing shelter, while tens of billions in federal funding intended to pay their back rent sit untapped.

The expiration was a humbling setback for President Biden, whose team has tried for months to fix a dysfunctional emergency rent relief program to help struggling renters and landlords. Running out of time and desperate to head off a possible wave of evictions, the White House abruptly shifted course on Thursday, throwing responsibility to Congress and prompting a frenzied — and ultimately unsuccessful — rescue operation by Democrats in the House on Friday.

The collapse of those efforts reflected a cascade of breakdowns in the federal government’s attempts to get states to speed housing assistance to tenants. Hampered by a lack of action by the Trump administration, which left no real plan to carry out the program, Mr. Biden’s team has struggled to build a viable federal-local funding pipeline, hindered by state governments that view the initiative as a burden and the ambivalence of many landlords.

As a result, the $47 billion Emergency Rental Assistance program, to date, disbursed only $3 billion — about 7 percent of what was supposed to be a crisis-averting infusion of cash.

Adding to the urgency, Justice Brett M. Kavanaugh warned last month, when the Supreme Court allowed a one-month extension of the eviction moratorium to stand, that any further extensions would have to go through Congress. But there was little chance that Republicans on Capitol Hill would agree, and by the time White House officials asked, only two days remained before the freeze expired, angering Democratic leaders who said they had no time to build support for the move.

“Really, we only learned about this yesterday,” said Speaker Nancy Pelosi, who had publicly and privately urged senior Biden administration officials to deal with the problem themselves.

“What a devastating failure to act in a moment of crisis,” said Diane Yentel, the president of the National Low Income Housing Coalition, which had pressed for an extension of the moratorium. “As the Delta variant surges and our understanding of its dangers grow, the White House punts to Congress in the final 48 hours and the House leaves for summer break.”

The federal eviction moratorium, put in place by the Centers for Disease Control and Prevention in November, was effective, reducing by about half the number of eviction cases that normally would have been filed since last fall, according to an analysis of filings by the Eviction Lab at Princeton University.

Advocates have argued it is also a public health imperative, because evictions make it harder for people to socially distance.

The lapse of the federal freeze is offset by other pro-tenant initiatives that are still in place. Many states and localities, including New York and California, have extended their own moratoriums, which should blunt some of the effect. In some places, judges, cognizant of the potential for a mass wave of displacement, have said they would slow-walk cases and make greater use of eviction diversion programs.

Tags: Eviction, Real Esta, US Politics
You may also like
Recent News: