AUSTIN, Texas — It was an awkward few minutes for Briscoe Cain, the conservative provocateur and handpicked Republican chair of the State House Elections Committee, as he fumbled through his defense last week of the restrictive new voting bill his party is moving through the Texas Legislature.

Representative Rafael Anchia, a Democrat, was grilling Mr. Cain, the bill’s sponsor, about a phrase in it calling for the “purity of the ballot box,” asking Mr. Cain if he knew that it evoked the discriminatory voting restrictions of Texas’ Jim Crow past.

“Are you aware that references to purity of the ballot box used throughout this country’s history has been a justification for states to disenfranchise groups they deem unfit to vote or somehow lacking?” Mr. Anchia asked.

“I didn’t know that,” Mr. Cain said haltingly, claiming he adopted the language because it was in the state’s Constitution, before admitting that “these are troubling things.”

That opened floodgates for Democrats’ opposition, as they began hammering the structure of the bill, one of Gov. Greg Abbott’s priorities for the legislative session. Democrats eventually raised a point of order and added amendments that softened some of the harshest measures. Some of them may be restored in the next week as the House and the Senate meet in conference to work out the final bill.

Viewed by some as a legislative lightweight and others as a rising conservative firebrand, Mr. Cain, 36, was a surprise choice when he was named to lead the House Election Committee earlier this year. As head of the committee, he would be charged with the critical responsibility of helping pass the Republicans’ voting bill, a priority with Mr. Abbott and a measure that adds restrictions to voting in a state that is already considered the hardest in the country in which to cast a ballot. There would be tricky waters to navigate against legions of detractors.

Mr. Cain had only four years of legislative experience and a reputation as a brash and unpredictable combatant for his deeply conservative causes. In 2018, he crashed the state Democratic Party convention and handed out lawn signs that said, “This home is a gun-free safe space.”

After the November election, he flew to Pennsylvania to help the Trump legal effort to overturn the results while posting selfies. He drew national attention in 2019 after being temporarily barred from Twitter for what was interpreted as a threatening post against a Democratic presidential candidate, Beto O’Rourke.

Mr. Cain’s fumbling of the questions about the “purity of the ballot box” phrase has brought even greater scrutiny to the Houston-area lawmaker. A clip of the exchange with Mr. Anchia went viral on social media, with views climbing into the millions, and exposed Mr. Cain as lacking knowledge about Texas’ history of discrimination against Black voters.

The “purity of the ballot box” language was eventually removed.

With just weeks left before the Republican-controlled Legislature adjourns, Mr. Cain will again play a lead role in the next round of sparring over the bill, this time as one of two committee co-chairmen shaping a final version.

Critics who have protested Mr. Cain’s appointment to the committee say his lack of familiarity with the purity phrase and overall stewardship of the panel raise questions about his effectiveness going into the next phase of the debate.

They also cite a chaotic committee session that was forced to recess after Mr. Cain refused to let Nicole Collier, chair of the House Criminal Jurisprudence Committee, sit in on the session to question witnesses as a nonmember. His error led to a lengthy delay in moving the bill forward and enraged Democrats and civil rights groups. She was permitted to ask questions during a subsequent session.

“This is our first rodeo with Briscoe Cain,” said Nina Perales, vice president of litigation for the Mexican American Legal Defense and Educational Fund, who has engaged in legal battles against the state in behalf of Texas Latinos since 1996. “And after recovering from the shock that he was appointed chair of the election committee, I mean it’s been one misstep after the next.”

Mr. Cain’s office declined a request for an interview or to answer questions about his exchange with Mr. Anchia. But several of his Republican colleagues gave high marks for his leadership and his handling of one of the governor’s top priorities.

“One of the hardest bills to pass in this building is an omnibus election bill,” said Representative Stephanie Klick, a Fort Worth Republican who preceded Mr. Cain as Election Committee chair. “I think he’s done amazing being able to get an omnibus bill in his first session as chair.”

Bryan Hughes, the chairman of the Elections Committee in the State Senate, said he had a “great relationship” with Mr. Cain and gave him a strong endorsement for his grasp of election law.

“He knows the election code very well,” said Mr. Hughes, who is from East Texas. “He’s really immersed in it. He’s the ideal representative to be carrying this bill.” 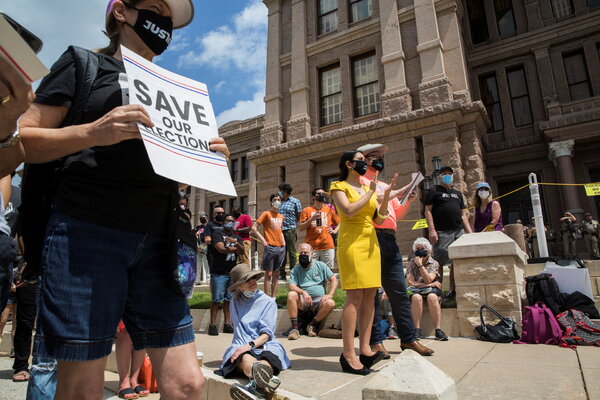 But Democrats on Mr. Cain’s Republican-dominated committee said the chairman led in a highly partisan and autocratic manner, shunning any effort to work with Democrats. Representative Jessica González, a former White House intern who served in the Obama-Biden campaign and is vice chair of the Elections Committee, said Mr. Cain basically kept her out of the loop despite her position as No. 2.

“Hey, just give us some notice,” she said in describing her frustration. “We’ve got to be able to communicate.”

Representative Michelle Beckley, a Democrat who represents a North Texas district that was in Republican control for decades, sat next to Mr. Cain on the House floor during the last session and said she normally had a friendly relationship with him, despite their partisan differences.

“Our politics are a hundred percent polar opposites, but the one thing with Briscoe is that he does keep his word, which I will have to say is a rarity in this building,” she said.

But the voting bill has been a different story, she said. “I really don’t want to be mean to him, but it was very disorganized from Day 1,” she said, recalling that Mr. Cain frequently didn’t follow protocols and rushed through bills, a practice that often led to procedural errors.

(In testimony emailed to the committee in late March, the NAACP Legal Defense and Educational Fund said the phrase “has deep ties to calls by white legislators in the state to ensure the ‘purity of the Anglo-Saxon race’ by, among other tactics, disenfranchising Black Texans.”

But Ms. Beckley said she too was unaware of the roots of the language. The day after the House debate, she recalled, Mr. Cain came to her desk and asked, “Did you know about this?”

“I’m not going to lie,” she said in an interview, “I did not know that history.”

In 2019, Mr. Cain revealed that he has Asperger’s syndrome during a speech on the House floor during Autism Awareness Month. He also injected a humorous note: “I suspect many of you are thinking to yourself, so that explains it. And yes, your assumptions are correct — that’s why I’m highly intelligent.”

He lives with his wife and five children in Deer Park, where he grew up, and serves as a captain in the Texas State Guard.

Mr. Cain’s four-year tenure in the Legislature has been somewhat of a roller coaster, at least by outside observations. As a freshmen legislator in 2017, Mr. Cain was put at the top of Texas Monthly’s “worst legislators” list, which called him “uninformed and belligerent.”

The article cited an instance when Mr. Cain debated a member of his own party, Representative John Zerwas, who is a doctor, over funding a state council that promotes palliative care. Mr. Cain repeatedly referred to the practice as a “death panel,” though when pressed by Mr. Zerwas, he was unable to further explain the practice. Eventually he conceded, “I recognize that you know about this and my apologies.”

During his tenure in office, Mr. Cain has cultivated a quippy and lashing social media account that often seeps into right-wing troll territory. He buttresses his online reputation with a penchant for public stunts.

He drew national outrage when he tweeted at Mr. O’Rourke, then a Democratic candidate for president, that “My AR is ready for you” when Mr. O’Rourke advocated taking away AR-15 rifles after the mass shooting in El Paso. Mr. O’Rourke likened the tweet to a death threat, and Twitter suspended Mr. Cain’s account for 141 days.

Mr. Cain’s attention has recently turned to voting, and he has authored numerous bills in 2019 and 2021 that would have brought a raft of new restrictions with varying degrees of severity.

Last year, he opposed any expansion to voting by mail during the pandemic, and Texas was one of five states that did not expand the option during the general election.

In November, when it became clear President Donald J. Trump had lost to President Biden, Mr. Cain was an enthusiastic supporter of Mr. Trump’s false claims that the election was rigged. “Election fraud is real and we must put an end to it,” he wrote on Facebook on Nov. 6.

He quickly joined the Trump legal effort and took off for Pennsylvania. Before leaving, Mr. Cain posted a selfie to his Facebook account, clad in a cowboy hat and clear aviator glasses, captioned, “This Texas lawyer is flying to Philadelphia this morning to link up with a team of attorneys from across the country to fight for a fair and honest election.”

His brief tenure as an election lawyer in Pennsylvania ended with the state Supreme Court rejecting his effort in a unanimous decision.

Tags: US Politics, Voter Fraud;Elect
You may also like
Recent News: