WASHINGTON — The moment Chuck Schumer achieved his longtime dream of becoming Senate majority leader, he was in a secure room hiding from a violent pro-Trump mob that was rampaging through the Capitol.

As rioters prowled the halls hunting for top lawmakers — Mr. Schumer, Democrat of New York, later heard that one had been looking for his desk, saying, “Where’s the big Jew?” — he was being evacuated with other leaders to a safe room at an undisclosed location.

It was then that news outlets confirmed that Jon Ossoff, a Democrat, had won the final Georgia Senate race that would give the party the majority, handing Mr. Schumer the top job. Senator Mitch McConnell, Republican of Kentucky, turned to the man who had engineered his defeat and offered a brief concession and congratulations.

With that, Charles Ellis Schumer, 70, the Brooklyn-raised son of an exterminator and a homemaker, became the first New Yorker ever to lead the United States Senate.

“Jan. 6 was the best of times,” Mr. Schumer said in a recent interview in his office, where he cracked open a Diet Coke. “And it was the worst of times.”

His dream job has come with huge challenges and a practically nonexistent margin for error. Mr. Schumer rose to power on the strength of his skills as a party messenger and relentless campaign strategist, not his talent as a legislative tactician.

Now it falls to him to maneuver President Biden’s ambitious agenda through a polarized, 50-50 Senate without one vote to spare, navigating between the progressive and moderate factions in his party in the face of a Republican opposition that is more determined than ever.

Mr. Schumer passed his first test over the weekend, squeezing Mr. Biden’s sweeping $1.9 trillion stimulus measure through the Senate along party lines — an effort that nearly fell apart as Senator Joe Manchin III, Democrat of West Virginia and a crucial moderate, balked at the 11th hour. Mr. Schumer negotiated a concession, and the bill passed, paving the way for emergency aid and the most far-reaching antipoverty effort in a generation.

“I’ve never seen anyone work as skillfully, as ably, as patiently, with determination to deliver such a consequential piece of legislation,” Mr. Biden said of Mr. Schumer.

The effort forced the Senate leader to straddle his party’s centrist and progressive wings, a trick he will have to master if he hopes to keep the president’s agenda on track and Democrats in control of the chamber, as well as fending off a possible 2024 primary challenge from Representative Alexandria Ocasio-Cortez, the high-profile progressive from the Bronx.

Asked what he would do about her, Mr. Schumer shrugged and said he talked to Ms. Ocasio-Cortez “all the time.”

“What I’ve done throughout my career,” he added. “I do my job well, and everything works out.”

‘I Love My Members!’ 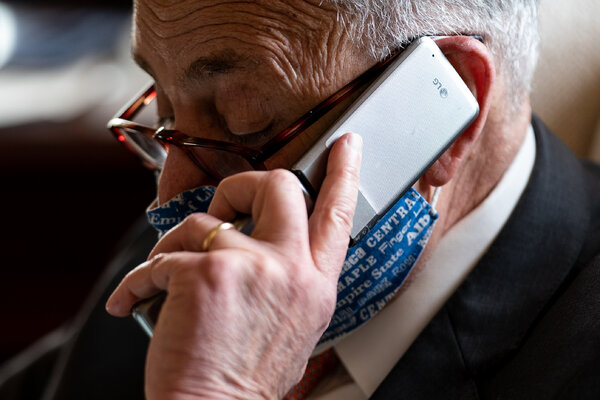 If Mr. Schumer’s victory was overshadowed by the violence of Jan. 6 and the chaos that followed, it has not slowed his pace or scaled back his plans.

After the stimulus measure, the next items on his agenda are all ambitious and difficult, beginning with a sweeping infrastructure and jobs proposal aimed at addressing climate change, economic inequality and racial justice.

The bills would be huge victories for Democrats, showing that they can deliver the progressive policies they have promised. But Mr. Schumer faces formidable hurdles in keeping together his ideologically diverse caucus, which includes conservative Democrats and a self-described democratic socialist. He also will have to outmaneuver Mr. McConnell, who likes to call himself the “grim reaper” because of a long history of using his mastery of Senate strategy to obstruct Democratic initiatives.

Mr. Schumer, who is more of a happy warrior, has traditionally been less focused on the intricacies of the Senate floor. But at a moment when unity is critical to his party’s success, he has attributes that Democrats may need more: strong relationships with his colleagues and a knack for reading their political moods, along with a flair for communication.

“I know every one of my colleagues’ numbers by heart,” he said in the interview, waving his signature flip phone in the air. “I love my members. I truly love them!”

(Asked at a news conference on Saturday whether that included Mr. Manchin, who single-handedly delayed the stimulus measure for about 10 hours by haggling over jobless aid, Mr. Schumer grinned and said enthusiastically, “Yes!”)

The first Jewish person to hold the top Senate job, Mr. Schumer peppers his speech with Yiddish expressions. He can be sentimental — President Donald J. Trump mocked him as “Cryin’ Chuck” after he wept during a news conference objecting to the travel ban — and a bit of a ham.

His effusive personality has helped him develop personal bonds with lawmakers of every ideological stripe. Mr. Schumer has 11 Democrats on his leadership team that meets each Monday, including the Senate’s most conservative, Mr. Manchin, and its two most left-learning members, Elizabeth Warren of Massachusetts and Bernie Sanders, the Vermont independent.

Most of them refer to him as a friend.

“Anybody and everybody can work with Chuck,” said Mr. Manchin, who because of the tight Senate margin is a crucial swing vote on everything that crosses Mr. Schumer’s desk.

Mr. McConnell’s willingness to employ hardball tactics might give him the “negotiating advantage in many circumstances,” said Ms. Warren, whom Mr. Schumer wooed to run for the Senate in 2012 over a meal at Hunan Dynasty, his favorite Chinese restaurant a few blocks from the Capitol.

“But when the Democrats stand together behind Chuck,” Ms. Warren said, “Chuck has shown that he can deliver.”

Less clear is how effective he can be at courting the moderate Republicans he will most likely need to push through key priorities in the Senate, where 60 votes are required to advance most major bills. His relationship with Senator Susan Collins, the Maine Republican who may be the single most important swing vote, grew particularly toxic after Mr. Schumer attacked her during her latest re-election race.

Mr. Schumer’s political action committee ran ads accusing Ms. Collins’s husband of enriching himself through the opioid crisis and charging that she had “pocketed” money from drug companies.

“His tactics were unworthy of a Senate race,” Ms. Collins said, calling the ads “deceptive” and “shameful.”

She said Mr. Schumer’s only goal was to “jam the Republicans and force partisan, highly political votes on nearly every major issue.”

“So far,” she said of the majority leader, “the signs are not promising.”

Mr. Schumer was not always regarded as a liberal partisan, but his path to the top Senate job has involved considerable reinvention. When he campaigned for the Senate in 1998, he described himself as an “angry centrist” who was “tough on crime.”

His critics have long portrayed him as too cozy with Wall Street, and a review of his Senate record by The New York Times in 2008 showed that he repeatedly took steps to protect industry players from government oversight and tougher rules.

But as his party has moved to the left, Mr. Schumer has aligned himself more closely with its progressive wing. In addition to backing a clean-energy jobs initiative that is part of the infrastructure plan, he has been among the leading voices calling on Mr. Biden to cancel up to $50,000 in student debt.

“The world changes, and you have to change with it,” Mr. Schumer said. “Income inequality is much worse. Climate change is much more dangerous.”

His ability to work both wings of his party was on display on Friday, when Mr. Schumer spent hours in painstaking negotiations with Mr. Manchin, who wanted to scale back unemployment payments, a core liberal priority in the stimulus bill. As action stalled, Republicans gleefully laid the chaos at the new majority leader’s feet.

But in the end — after a marathon series of calls with Ron Klain, the White House chief of staff, Mr. Manchin and others — Mr. Schumer had a deal, and he held Democrats together in beating back Republican attempts to erode support for the bill with politically tricky votes.

“Not a single member defected on any significant vote,” Mr. Schumer said.

Those who know Mr. Schumer say he has been preparing for his current job for nearly his entire life.

His first foray into politics came in 1968, during a low moment in his freshman year at Harvard, after the basketball coach dashed his hopes of playing for the team.

A distraught Mr. Schumer wrote to his mother, saying he wanted to come home and go to Brooklyn College. But then he was invited to join the Harvard Young Democrats, whose backing for Eugene McCarthy was part of an antiwar movement that swept the nation and ultimately prompted President Lyndon B. Johnson not to seek another term.

“There’s a Yiddish word — beshert — God’s hand,” Mr. Schumer said. “I said to myself, ‘Holy moly! A ragtag group of students and other assorted nobodies toppled the most powerful man in the world? This is what I want to dedicate my life to.’”

So at 23, he ran for a seat in the New York State Legislature, making him the second-youngest person after Theodore Roosevelt to do so. He won, and has never lost a race in the nearly half-century since, rising to the House of Representatives in 1981 and eventually to the Senate in 1999.

One task that Mr. Schumer especially loves, and to which he owes his current post, is his relentless work recruiting winning Democratic candidates. It is a major reason that, in a year when his party lost 13 seats in the House, it was able to recapture the Senate, albeit by the thinnest of margins.

Ms. Warren recalled Mr. Schumer “hammering” her in 2011 until she agreed to run. He has had dozens of similar meetings over the years.

As John Hickenlooper, the former Colorado governor, pursued the Democratic presidential nomination last year, Mr. Schumer was pestering him from the sidelines to consider a Senate run. He waited until a few days after Mr. Hickenlooper had left the presidential race, summoned the Coloradan and his wife for a meeting that lasted five hours and made his case. Mr. Hickenlooper ran and won, picking up a crucial Senate seat for Democrats.

Mr. Schumer has had his share of disappointments, too. He wanted badly for Stacey Abrams, the former Georgia House minority leader, to challenge the Republican Kelly Loeffler for her Senate seat, but Ms. Abrams had her sights set on another office and instead urged him to choose the Rev. Raphael Warnock, a progressive Black pastor.

It took about four months of cajoling by Mr. Schumer, but Mr. Warnock eventually agreed. His victory in a runoff in January was one of the final two pickups that handed Senate control to the Democrats.

Ms. Abrams recalled steeling herself as she called Mr. Schumer to let him know she would not run.

“Having worked with people with big personalities, there was a range of responses it could have been, and his was instinctive kindness,” she said. “Which is why, when I get a call from Chuck Schumer, I take it.”