In a New Year message, the Prime Minister issued a rallying cry to Britons to “make the most of” independence from the EU and “come together” as one United Kingdom. He set his ambition on the country becoming a “science superpower” to create jobs and prosperity in the recovery from the coronavirus pandemic. “This is an amazing moment for this country.

“We have our freedom in our hands and it is up to us to make the most of it.

“And I think it will be the overwhelming instinct of the people of this country to come together as one United Kingdom – England, Scotland, Wales and Northern Ireland working together to express our values around the world,” the Prime Minister said.

He spoke out ahead of the end of the Brexit transition out of the EU’s single market and customs union at 11pm last night.

Parliament’s iconic Big Ben bell, silenced by renovation work, was due to chime to mark the moment having been temporarily re-activated for New Year’s Eve. 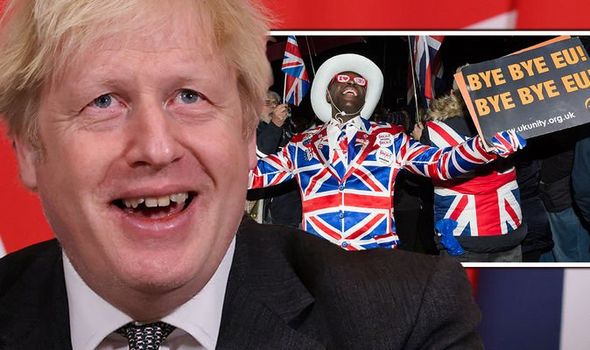 Mr Johnson declared that freedom from Brussels rules will make Britain “free to do trade deals around the world and free to turbocharge our ambition to be a science superpower.”

He said: “From biosciences to artificial intelligence, and with our world-leading battery and wind technology we will work with partners around the world, not just to tackle climate change but to create the millions of high skilled jobs this country will need not just this year – 2021 – as we bounce back from Covid, but in the years to come.”

Looking forward to the UK hosting the G7 and COP 26 international summits of world leaders in 2021, Mr Johnson promised “an open, generous, outward looking, internationalist and free trading global Britain, that campaigns for 12 years of quality education for every girl in the world.”

Mr Johnson’s hopes of signing more trade deals were boosted yesterday when Woody Johnson, the US ambassador to London, looked forward to building a trans-atlantic agreement.

“As Big Ben rings tonight at 11pm especially for Brexit, the US will be right along with you, toasting the many new possibilities now open to you. The US-UK free trade agreement at the top of my list!” he wrote on Twitter.

Eurosceptic Tory MPs last night hailed the end of the Brexit transition period as a “victory for democracy and sovereignty”.

Veteran anti-Brussels Tory Sir Bill Cash said it is a “victory for democracy and sovereignty” that can only be compared in peacetime with the evolution of modern democracy after the end of the Stuart dynasty.

He was “extremely happy and glad” that the UK is leaving the single market and customs union, and praised Mr Johnson, negotiators and voters for making it happen.

Sir Bill, who has sat on the European Scrutiny Committee for 35 years, said: “The victory is one for democracy and for sovereignty and it is a momentous moment which, by any historic standards, can only be compared in peacetime to what happened in the late 1680s and ’90s.

“Which was the removal of the Stuarts, but followed by the new parliamentary constitutional arrangements which were enacted through the Act of Succession with the Hanoverians going on the throne.

“But followed by evolution of modern democracy which was only ruptured, apart from war, in terms of potential dangers of conquest, but was actually only disrupted by our entry into the European Community on the false prospectus in 1972.”

Mark Francois, chairman of the European Research Group of Tory Brexiteers, tsaid: “Tonight we get a chance to wave both 2020 and the EU goodbye, within an hour of each other.

“After a truly terrible year and a great struggle for our liberty, it’s a marvellous example of a buy one, get one free.”

Tory Eurosceptic Peter Bone said he would be celebrating with French champagne to “show that we are pro-Europe but anti-EU”.

“It has been a very long campaign and we’ve gone from being looked on as being strange people that wanted to leave this wonderful European Union by the establishment who have always held that view, to being able to campaign and get the support of people to defeat the establishment,” he said.

Sir John Redwood, who has been a Tory MP for more than 30 years, felt “much relief” that the UK has stated its wish to be “self-governing”.

He said: “I never doubted we would win the referendum. I argued that we were being good Europeans by stepping aside from their mighty task to create a United States of Europe.

“We should wish them well and be friends with them, but the fact that the UK had refused to join the euro showed where our hearts resided – with the wider world and with national democracy.

“Today I feel much relief that our country has been open with our friends in Europe and stated clearly we wish to be self-governing, whilst good friends and allies of theirs.

“I look forward to 2021 as a year of strong economic recovery, where we can start to use the new freedoms and opportunities now open to global Britain.”