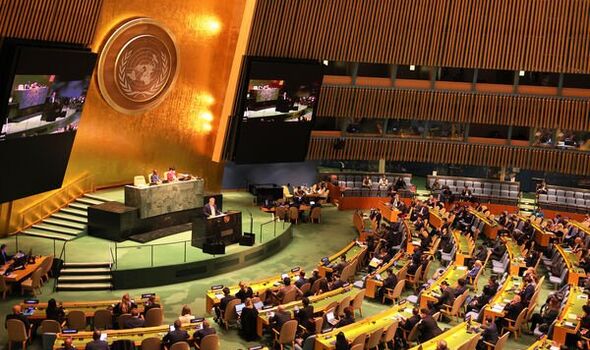 She added: “The barbaric actions of Vladimir Putin’s regime in Ukraine and the mounting evidence of war crimes mean Russia can no longer have a seat.”

Ukraine’s Foreign Minister Dmytro Kuleba said he was grateful to all member states who “chose the right side of history”.

He added: “War criminals have no place in UN bodies aimed at protecting human rights.”

The UN vote in New York further isolates the Kremlin from the international community.

Ukraine’s UN Ambassador Sergiy Kyslytsya hit back: “You do not submit your resignation after you are fired.”

The other countries who voted against ousting Russia included Iran, Kazakhstan, Cuba, Belarus and Syria.

The 58 nations that abstained included Brazil, India, Mexico, Senegal and South Africa. Many urged diplomacy instead.

It comes after Nato members agreed to strengthen support for Ukraine at a summit in Brussels.

Secretary General Jens Stoltenberg said allies were ready to increase military equipment and “realise and recognise the urgency”. But he warned them to be prepared for the “long haul” with a war that may last years.

Mr Kuleba also asked the Nato meeting for urgent help, warning it would be too late unless action is taken immediately.

Urkaine’s Foreign Minister said: “My agenda is very simple, it has only three items on it: weapons, weapons and weapons.”

“We are confident that the best way to help Ukraine now is to provide it with all necessary weapons to contain Putin and to defeat the Russian army in the territory of Ukraine so the war does not spill over further.”

Ms Truss, who attended the Nato summit, said: “We agreed to step up support for Ukraine and we’ve also recognised that the conflict has entered a new and different phase with a more concentrated Russian offensive.”

“There was support for countries to supply new and heavier equipment to Ukraine so that they can respond to these new threats from Russia.”

“And we agreed to help Ukrainian forces move from their Soviet-era equipment to Natostandard equipment on a bilateral basis.”

“Putin has changed his tactics, but not his intent. He wants a hold over the whole of Ukraine.”

“And our objective as a United Kingdom remains clear. Putin must lose in Ukraine.”

The UK is already supplying equipment including anti-tank and anti-air missiles to Ukraine’s armed forces.

Prime Minister Boris Johnson said the Government is looking at how it can bolster its military assistance. Military chiefs are said to be drawing up plans to send armoured vehicles to Ukraine to help forces push back Russian troops. Mr Johnson said: “People are looking at what is happening in Ukraine and they can see this is systematic slaughter of innocent people.

“Whatever term you want to use, it is totally unconscionable, and the world is now overwhelmingly on the side of the Ukrainians.

“The UK will continue with our friends and partners to do everything we can to help.

“We are looking at what more we can give.” Labour leader Sir Keir Starmer said he would support supplying armoured vehicles.