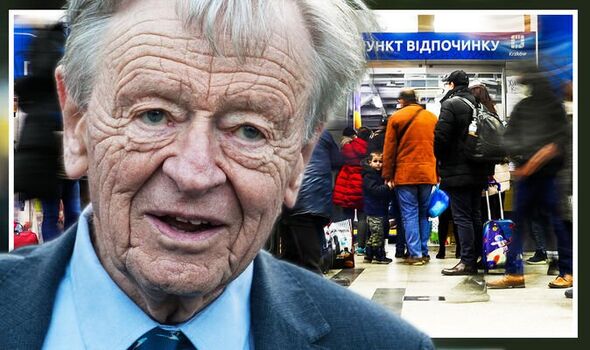 You can add your voice to the tens of thousands of comments posted daily on Express.co.uk and have your say on the big issues facing the country today.

Lord Dubs, who fled the Nazis as a child, wrote in the Daily Mirror that while it “would be quite wrong” for the UK to intervene militarily, the Government “must welcome those fleeing with open arms”.

He said: “Britain’s response to the Ukrainian refugee crisis has been a national humiliation so far.

“Many nations have allowed refugees in without visas but the UK has turned people away in Calais and sent them to Paris or Brussels.

“This is a disgraceful way to treat people fleeing war, no doubt feeling broken by the brutal journey they have made across Europe.”

According to figures from the United Nations (UN), 2,698,280 people have fled Ukraine – correct as of March 12 – since Russia invaded on February 24.

Poland has taken in the most refugees, with more than 1.5 million people, while the British Government has said it’s granted visas to just 3,000 Ukrainians.

So, is Lord Dubs right? Has the UK so far failed to meet the challenge of Europe’s largest refugee crisis since World War Two?

HAVE YOUR SAY RIGHT NOW – JOIN THE EXPRESS READER DEBATE IN OUR COMMENTS SECTION.