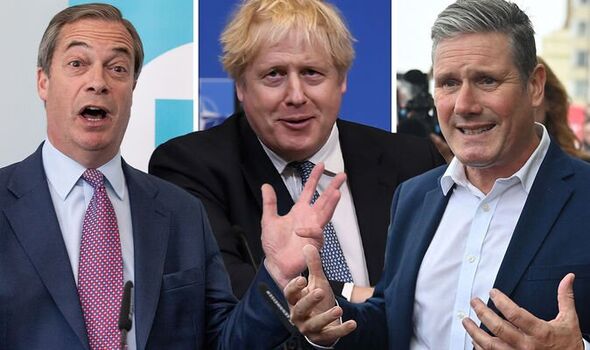 Add your voice to the tens of thousands of comments daily on Express.co.uk and have your say on the hot topic of the day.

Boris Johnson won the 2019 election on the promise to ‘Get Brexit Done’ – and the Conservatives successfully took the UK out of the bloc in January 2020.

But despite the official departure, negotiations regarding the much-maligned Northern Ireland Protocol have left some Brexiteers wondering if the UK will ever truly be separated from the EU.

Labour has come a long way since the days of Jeremy Corbyn’s relative disinterest in Brexit – with Sir Keir Starmer, a former remainer, offering his support for Brexit by saying: “We’ve left the EU. There’s no case for rejoining, so we have to make it work. We are out and we’re staying out.”

And then there’s Nigel Farage, the arch Brexiteer and former MEP who was at the forefront of Britain’s campaign to leave while leader of UKIP.

Mr Farage is responsible for mainstreaming Euroscepticism, bringing about the 2016 referendum and then delivering the vote for Brexit – and it’s all the more impressive due to the fact he never reached the House of Commons.

But as Mr Johnson is beleaguered by numerous scandals, Sir Keir’s record of support is weak, and Mr Farage is beset by a lack of influence due to his resignation from politics – who do you trust the most when it comes to Brexit?