In Madison, Wis., thousands of people have gone to parks to deliver their ballots during Saturday voting festivals. In Milwaukee, Facebook feeds are inundated with selfies of Democrats inserting ballots into drop boxes. And along the shores of Lake Superior, voters in Wisconsin’s liberal northwest corner still trust the Postal Service to deliver ballots.

Of all the mini-battlegrounds within Wisconsin — perhaps the most pivotal state in November for both President Trump and Joseph R. Biden Jr. — the mother lode of absentee ballots is coming in Dane County, a Democratic stronghold that includes Madison. As of Friday, the number of submitted ballots there amounted to more than 36 percent of the county’s total 2016 election vote, a sign of significant enthusiasm; that figure is 10 percentage points higher than in any other county in the state.

In Wisconsin’s Republican heartland, the suburban counties that ring Milwaukee, the absentee turnout is only at about the state average so far. And in the dozens of rural counties where President Trump won huge victories four years ago, ballots are being returned at a far slower rate than in the state’s Democratic areas.

The yawning disparities in voting across Wisconsin and several other key battlegrounds so far are among the clearest signs yet this fall that the Democratic embrace of absentee voting is resulting in head starts for the party ahead of Election Day. For Republicans, the voting patterns underscore the huge bet they are placing on high turnout on Nov. 3, even as states like Wisconsin face safety concerns at polling sites given the spikes in coronavirus cases.

The Democratic enthusiasm to vote is not limited to Wisconsin. Ballot return data from heavily Democratic cities like Pittsburgh; Chapel Hill, N.C.; and Tampa, Fla., and the long lines of cars waiting at a Houston arena to drop off ballots, are signs that many voters have followed through on their intentions to cast ballots well ahead of Nov. 3.

There is still time for Republicans to catch up in many places, and they are expected to vote in strong numbers in person on Election Day. And untold numbers of absentee ballots could be rejected for failing to fulfill requirements, like witness signatures, or could face legal challenges. But in states that have begun accepting absentee ballots, Democrats have built what appears to be a sizable advantage, after years when Republicans were usually more likely to vote by mail.

Tom Bonier, the chief executive of TargetSmart, a Democratic data firm, said his models showed Democrats with a 10-point advantage among the 275,000 first-time voters nationwide who had already cast ballots and an 18-point lead among 1.1 million “sporadic voters” who had already voted.

At the same point in the 2016 cycle, Mr. Bonier said, his model showed Democrats with a 1.6-point advantage among sporadic voters.

Across the country, voters in states with little history of casting their ballots weeks before Election Day have embraced the practice as the nation grapples with the eighth month of a pandemic that has so far killed more than 212,000 Americans.

As of Friday, more than 8.3 million ballots had already been received by elections officials in the 30 states that have made data available. In six states — including the battlegrounds of Wisconsin and Minnesota — the number of ballots returned already is more than 20 percent of the entire 2016 turnout.

Wisconsin’s municipal clerks can begin tabulating absentee ballots once the polls open on Election Day. As a result, the full results from early voting in Wisconsin as well as some other states may not be known after Nov. 3.

Officials from both parties say that Democrats are far more eager to vote early, a consequence of encouragement from party leaders like Mr. Biden and former President Barack Obama to vote as soon as possible to avoid possibly exposing themselves to the virus at Election Day polling sites. Many Republicans have followed the lead of Mr. Trump, who has regularly castigated voting by mail, while the party’s leadership in some states has offered mixed messages about when supporters should vote.

While Wisconsin Democrats have waged a campaign for months to urge voters to request absentee ballots and return them quickly, the Republican Party of Wisconsin recently sent mail to its supporters urging them to hand-deliver ballots to their local municipal clerks. But in much of Republican-heavy rural Wisconsin, clerks work only part-time, leaving fewer opportunities to return ballots by hand. 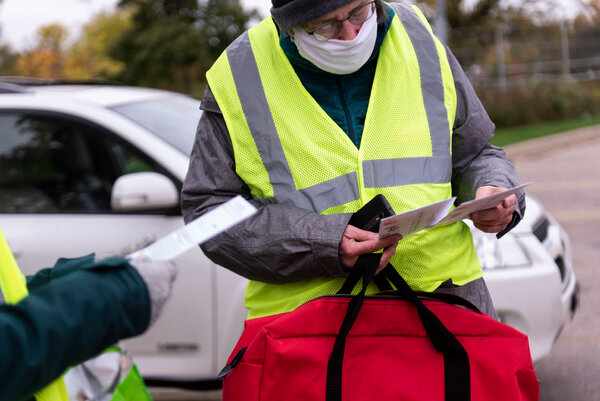 “The left is very focused on getting their people to request absentee ballots and return them,” said Matt Batzel, the Cedar Grove, Wis.-based executive director of American Majority, a conservative grass-roots training organization. “Democrats are in the lead as of the ballots that are returned, no doubt.”

Michael McDonald, a University of Florida political science professor, said the 2020 presidential election is the first in which Democrats are casting pre-Election Day ballots at a faster rate than Republicans.

What You Need to Know About Voting