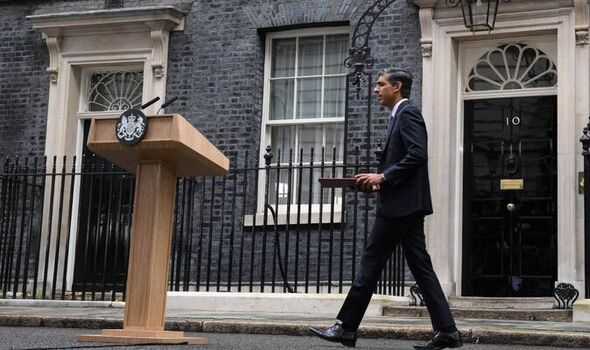 It was in stark contrast to the Jenga-style wooden structure used by his predecessor Liz Truss, which gave the appearance of being “completely unstable” said Judi James, the star of Channel 5 show Naked Celebrity.

Judi has analysed the lecterns chosen by the five Tory Prime Ministers of the past 12 years and believes they give a fascinating glimpse inside the minds of the men and women in power.

Speaking about the stand chosen by Mr Sunak, Judi described it as a “functional, no-frills, no-nonsense plain wooden number”, chosen to “reflect a sense of stability and to imply status”.

“It fitted his grim facial expression and it signalled the hard times he warned us were coming.”

It couldn’t be more different to the “twisted, crooked house of a lectern” used by Ms Truss.

“Liz Truss’s lectern looks completely unstable. It resembles a Jenga tower just before the lot is going to come crashing down after the next move,” said Judi.

Boris Johnson went for the “widest and biggest lectern, offering the best protection as a full body barrier, which can suggest a desire to hide in case of being caught out or criticised”.

The Prime Minister before him, Theresa May – a vicar’s daughter – used a much narrower lectern.

Judi said: “Her choice looks like a cross… which is a reflection of her firm religious beliefs.”

And her predecessor, David Cameron, opted for a flamboyant, curved lectern.

Judi said: “It’s smart and confident and the design suggests a sense of cool continuity.”