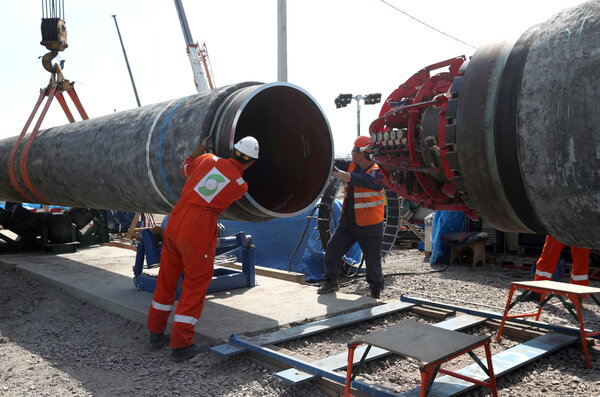 By Lara Jakes and Steven Erlanger

WASHINGTON — The United States has dropped its threat to block the Nord Stream 2 natural gas pipelines from Russia to Germany, officials said on Wednesday, formally setting aside a yearslong disagreement with Berlin over an energy deal that critics have warned would allow Moscow to starve Ukraine of transit fees that are crucial to Kyiv’s economy.

The Biden administration’s decision was effectively an acknowledgment that the pipeline project was too far advanced to stop, and that relations with Germany, a crucial ally, were too important to jeopardize over the dispute.

But it infuriated Republicans and Democrats in Congress who have demanded the use of economic penalties to halt the pipelines, and on Wednesday accused the administration of being soft on Russia.

The pipelines, each about 750 miles long, run from Russia directly under the Baltic Sea to Germany, bypassing Poland and Ukraine and denying those countries some transit fees. They are being built by a subsidiary of Gazprom, the Russian company that is controlled by the Kremlin, and will roughly double the amount of gas that Russia can supply directly to Germany.

The $11 billion project is expected to be operational by the end of the year despite construction delays as investors grew wary of being targeted by U.S. sanctions.