WASHINGTON — The head of the N.A.A.C.P. had a blunt warning for President-elect Joseph R. Biden Jr. when Mr. Biden met with civil rights leaders in Wilmington this week.

“Former Secretary Vilsack could have disastrous impact on voters in Georgia,” Mr. Johnson cautioned, according to an audio recording of the meeting obtained by The Intercept. Mr. Johnson said Mr. Vilsack’s abrupt firing of a popular Black department official in 2010 was still too raw for many Black farmers despite Mr. Vilsack’s subsequent apology and offer to rehire her.

Mr. Biden promptly ignored the warning. Within hours, his decision to nominate Mr. Vilsack to lead the Agriculture Department had leaked, angering the very activists he had just met with.

The episode was only one piece of a concerted campaign by activists to demand the president-elect make good on his promise that his administration will “look like America.” In their meeting, Mr. Johnson and the group also urged Mr. Biden to nominate a Black attorney general and to name a White House civil rights “czar.”

The pressure on the Democratic president-elect is intense, even as his efforts to ensure ethnic and gender diversity already go far beyond those of President Trump, who did not make diversity a priority and often chose his top officials because they looked the part. And it is coming from all sides.

When Mr. Biden nominated the first Black man to run the Pentagon this week, women cried foul. L.G.B.T.Q. advocates are disappointed that Mr. Biden has not yet named a prominent member of their community to his cabinet. Latino and Asian groups are angling for some of the same jobs.

Allies of the president-elect note that he has already made history. In addition to nominating retired Gen. Lloyd J. Austin III, to be the first Black secretary of defense, he has chosen a Cuban immigrant to run the Department of Homeland Security, the first female Treasury secretary, a Black woman at the Housing and Urban Development Department and the son of Mexican immigrants to serve as the secretary of health and human services. 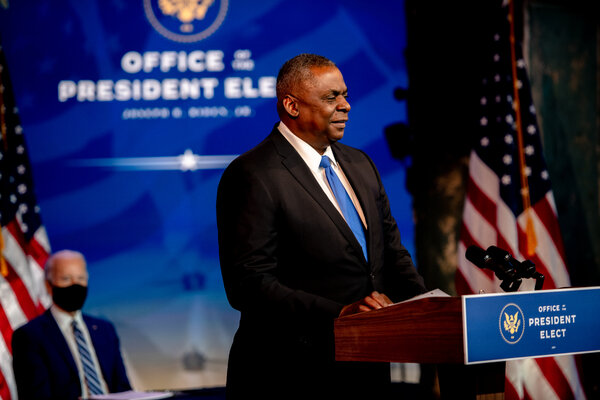 And, perhaps most notably, he picked Kamala Harris to be his running mate, making her the first Black person and the first woman to be vice president.

But the rollout of Mr. Biden’s cabinet and White House picks has created angst among many elements of the party. While some say he appears hamstrung by interest groups, others point out that his earliest choices included four white men who are close confidants to serve as chief of staff, secretary of state, national security adviser and his top political adviser, leaving the impression that for the administration’s most critical jobs Mr. Biden planned to rely on the same cadre of aides he has had for years.

“Added consternation,” the leader of one advocacy group in Washington said of Mr. Biden’s initial picks.

Glynda C. Carr, the president of Higher Heights for America, a political action committee dedicated to electing progressive Black women, said there was a feeling of defeat that Mr. Biden had not awarded key jobs in his cabinet to Black women, as the group had hoped.

Susan Rice, a Black woman who was United Nations ambassador and national security adviser in the Obama administration, had been seen as a candidate for secretary of state. Instead, she will become the director of Mr. Biden’s Domestic Policy Council, a position that does not require Senate confirmation. Representative Marcia L. Fudge of Ohio, another Black woman, was passed over for secretary of agriculture, the job she and her allies had pushed for, and instead was nominated to be secretary of housing and urban development.

Both the state and agriculture jobs went to white men instead.

“For me, I certainly would want Susan Rice to be on the team rather than not be on the team,” Ms. Carr said, but that it was “disappointing” to see Ms. Rice in a position that was not cabinet-level. “We need to continue pushing,” she added.

Women’s groups were also disappointed by Mr. Biden’s decision to pick General Austin for defense secretary instead of Michèle Flournoy, a longtime senior Pentagon official who had been seen as the leading contender for the job for months.

It did not help Mr. Biden’s case with women that he also chose Xavier Becerra, the California attorney general, as the health and human services secretary over Gov. Michelle Lujan Grisham of New Mexico, who was singled out as a likely candidate for the job just days before she was passed over.

Picking General Austin also did not assuage civil rights leaders like the Rev. Al Sharpton, who is adamant about the need for a Black attorney general, or at least someone with a background on voting rights enforcement.

In an interview after his meeting with Mr. Biden, Mr. Sharpton was blunt about when he would feel satisfied that the president-elect had kept his diversity promise.

Mr. Sharpton has also been clear about who he will not accept. He said Black activists would not support any position for Rahm Emanuel, the former chief of staff for President Barack Obama whose legacy as mayor of Chicago he condemns because of Mr. Emanuel’s handling of the killing of Laquan McDonald, a Black teenager, in 2014 by a police officer.

Other activists are equally determined to prevent the president-elect from nominating people they view as too conservative and too timid in confronting racial injustices or too connected to the corporate world.

This month, a group of over 70 environmental justice groups wrote to the Biden transition team urging the president-elect not to appoint Mary Nichols, California’s climate change regulator and one of the nation’s most experienced climate change officials, to run the Environmental Protection Agency.

“We would like to call your attention to Ms. Nichols’s bleak track record in addressing environmental racism,” the groups wrote, saying that she pushed California’s cap-and-trade program to reduce greenhouse gases at the expense of local pollutants, which disproportionately affect minority communities.

People close to the transition say Ms. Nichols may end up losing the job to Heather McTeer Toney, a regional E.P.A. administrator in the Obama administration, who is a top choice of liberal activists and would be the second Black woman to lead the agency.

Adam Green, the founder of the Progressive Change Campaign Committee, said liberal organizations have been largely happy with some of Mr. Biden’s picks, including Ron Klain, one of his longtime advisers, as chief of staff and Janet L. Yellen, a former chair of the Federal Reserve, to be Treasury secretary.

But he said that Mr. Biden had not selected any champion of the progressive movement, adding, “Those at the tip of the spear so far are not in the biggest positions.”

And nominees like Mr. Vilsack, whom Mr. Green accused of having too many ties to large corporate agriculture industries, are a disappointment, he said.

“There is so much opportunity with agriculture, especially if we want to make gains in the Midwest,” he said. But that would require a secretary willing to “go to bat for family farmers against big agriculture.”

As Mr. Biden mulls his choices for interior secretary, a coalition of Democrats, Native Americans, liberal activists and Hollywood celebrities is pressing him to appoint Representative Deb Haaland of New Mexico, a Native American, instead of Senator Tom Udall, Democrat of New Mexico and a longtime friend of Mr. Biden’s.

On Thursday night, a group of liberal activists, including the Sunrise Movement, one of the left’s most prominent groups, wrote to Mr. Udall, who is white, urging him take himself out of the running for a job that his father, Stewart L. Udall, had under Presidents John F. Kennedy and Lyndon B. Johnson.

“It would not be right for two Udalls to lead the Department of the Interior, the agency tasked with managing the nation’s public lands, natural resources and trust responsibilities to tribes, before a single Native American,” they wrote.

“I think one of the things I’m looking for when I see all of these picks put together is, what is the agenda?” she told reporters.

During his meeting with the activists, Mr. Biden bristled at the idea that his nominations suggest he was not pursuing a progressive agenda.

“I don’t carry around a stamp on my head saying ‘I’m progressive and I’m A.O.C.,’” Mr. Biden said, referring to Ms. Ocasio-Cortez. “But I have more of a record of getting things done in the United States Congress than anybody you know.”

The comments reflect what people familiar with Mr. Biden’s thinking say is his growing frustration with the public and private pressure campaigns.

But promises to interest groups during his campaign tend not to be forgotten.

Alphonso David, the president of Human Rights Campaign, a group dedicated to advancing the interests of the L.G.B.T.Q. community, said Mr. Biden assured him months ago that an L.G.B.T.Q. person would be named to a cabinet-level position requiring Senate confirmation — something that has never happened.

“That is an important barrier to break. we need to make sure that all communities are represented,” Mr. David said. Like other activists, Mr. David hesitated to pass judgment on Mr. Biden until he finished picking his cabinet.

“It’s too soon to tell yet,” he said. But he added a warning that Mr. Biden has heard all too often in recent days.

“If we don’t have the diversity of representation that Joe Biden has been pledging and that we are looking for,” he said, “there will be huge disappointment.”

Still, defenders of the president elect are equally direct.

“He picked the first woman and first Black vice president. First woman Treasury secretary. First Black defense secretary,” said Philippe Reines, a veteran Democratic operative and former top adviser to Hillary Clinton. “But if they can’t trust Joe Biden to continue to do the right thing and seek to pick the cabinet, they should do what he did: run for and win the presidency.”

Tags: 2020 election, Biden Transition
You may also like
Recent News:
This website uses cookies to improve your user experience and to provide you with advertisements that are relevant to your interests. By continuing to browse the site you are agreeing to our use of cookies.Ok