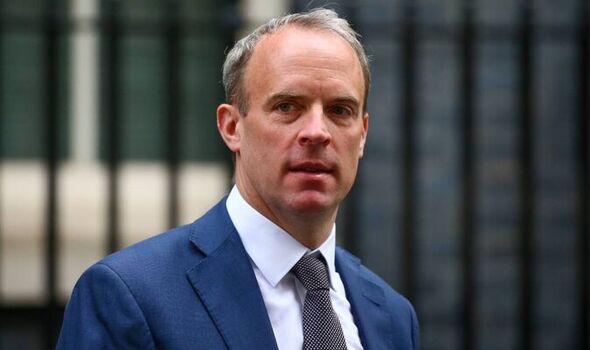 The deputy PM spoke out a day after Tory MPs had backed Mr Johnson to stay in his job.

Mr Raab said: “I think it’s important to respect the result. The country expects us to focus on them and not on the internal conversation.

“I think we should come together for the country. And focus on bread and butter issues that will make their lives better.

Dramatic “I think we draw a line in the sand after this vote. We move forward to deliver for the people in this country.”

Mr Raab said Monday’s dramatic result would be less damaging to Mr Johnson’s position than it was for Theresa May because at that time there was a hung Parliament.

But he added: “There’s no doubt there are challenges and no doubt we need to listen to some of the critics and the dissenting voices. I accept all of that.”

Wakefield and Tiverton & Honiton on June 23, seen as the next potential flashpoint for the Prime Minister.

He said: “By-elections are often an opportunity for a protest vote in a way that a general election isn’t.

“Governments of the day often lose by-elections and go on to win them at a general election.”

However, rebel Tories warned the contests, both triggered by Tory resignations, could be critical to the PM’s future.

“Red Wall” Wakefield in West Yorks had been Labour since 1932 until it was won by Tory Imran Ahmad Khan in 2019.

He quit after being convicted in April of sexually assaulting a 15-year-old boy in 2008.

The Lib Dems, who came third in 2019, believe they can win the seat, helped by a tacit agreement with Labour that gives them a virtually clear run.