Labour – led by Mr Corbyn from September 2015 until April 2020 – was surrounded by several allegations of anti-Semitism.

The party’s leader was also accused of not dealing sufficiently enough with allegations made.

Labour confirmed in a statement it has received a draft of the report from the EHRC, but that it would be “inappropriate to comment on any of the contents of the draft report” as it has been sent in confidence.

The statement said: “The Equality and Human Rights Commission has provided the Labour Party with a draft of its report into allegations of antisemitism.

“The draft report has been shared with the Labour Party as part of a process afforded to us prior to the report’s publication.

“It is sent in confidence by the EHRC, so until that process is completed, it would be inappropriate to comment on any of the contents of the draft report – and we will not do so.

But Labour said current leader Sir Keir Starmer and his reputy Angela Rayner are “committed to tackling antisemitism within the Labour Party”, adding it has been a “stain” on the opposition over recent year. 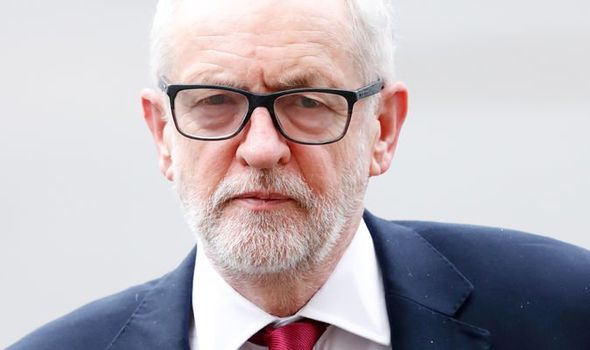 The statement also said anti-Semitism has caused “unacceptable and unimaginable levels of grief and distress for many in the Jewish community, as well as members of staff”

“It has caused unacceptable and unimaginable levels of grief and distress for many in the Jewish community, as well as members of staff.

“Tackling antisemitism within the Labour Party is a priority and we are determined to take the further action necessary to begin restoring trust with the Jewish community.

“We are committed to cooperating fully with the Commission’s investigation and implementing its recommendations when the final report is published.

Under the Equality Act 2010, the subject of an investigation by the EHRC must be given at least 28 days in order to make representations of its findings before the confirmed and final report is released.

The commission began its inquiry in May 2019 following continued allegations of anti-Semitism in the Labour Partry, ked at the time by Mr Corbyn.

Sir Keir Starmer, who took over as leader on April 4, immediately said it would be one of his priorities to tackle the issue and rebuild trust with the Jewish community.

Last month, Mr Corbnyn launched a scathing attack into the inquiry by the EHRC, questioning the body’s impartiality and raging it is “part of a Government machine”.

The EHRC was established in 2006 as a “non departmental public body” and describes itself as independent of the Government, but says it “works with Government to influence progress on equality and human rights”.

Speaking to the Middle East Eye in his first major interview since stepping down as Labour leader, the MP for Islington North attacked the EHRC.

When asked whether he believed its lack of independence would play a large part in the final report, Mr Corbyn replied: “Let’s see what happens.

“I think it’s quite significant that the Conservative government has underfunded the Equality and Human Rights Commission, and for some reason, which I don’t fully understand, decided to take away its independent status and make it part of the Government machine.”

The former Labour leader insisted he had taken steps to create a “robust process” to deal with allegations of antisemitism within the party soon after becoming leader more than five years ago, describing anti-Semitism as “absolutely, totally unacceptable in any form”.

When he investigated allegations of anti-Semitism, he found the numbers of cases to be “actually very small”, and passed each one onto Labour’s governance and legal unit.