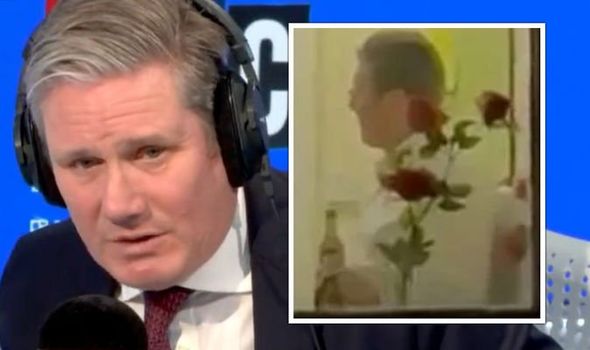 The Labour leader insisted he was working and “didn’t break any rules” when he was snapped socialising indoors. He was confronted by a caller during a phone-in after pictures emerged of the event who said his response was “like listening to Boris Johnson without the harrumphing”, adding: “You should apologise and you are a hypocrite for not.”

Education Secretary Nadhim Zahawi also called for Sir Keir to say sorry. “I hope he finds it within himself to apologise,” he said.

“I think people expect, you know, very high standards from their leaders, and I think that’s only right.”

Sir Keir has demanded Boris Johnson resign over No 10 parties held during 2020 when England was locked down.

The Labour leader was pictured in the office of City of Durham MP Mary Foy on April 30 2021 in the run-up to May’s local elections and the Hartlepool parliamentary by-election.

But Sir Keir insisted there was “absolutely no comparison with the Prime Minister” and his own workplace drinking.

During his LBC Radio phone-in show, Sir Keir said: “The picture of me was in a constituency office up in the North East, it was I think, three or four days before the May elections, so we’re really busy. I was with my team going across the country from place to place.

“We’re in the office, working in the office and we stopped for a takeaway, and then we carried on working and that is the long and the short of it.

“There was no breach of the rules. There was no party. And there was absolutely no comparison with the Prime Minister.”

Sir Keir said no restaurants or pubs were open and the hotel he and his colleagues were staying in did not serve food, so “if you didn’t get a takeaway then our team wasn’t eating that evening”.

Asked if he was prepared to apologise, Sir Keir said: “We didn’t break any rules, we were working in the office and we stopped for a takeaway.” He added: “We did nothing wrong.”

Sir Keir said: “I think that it’s in the national interest that Boris Johnson goes now… Put party politics to one side, he’s lost all authority and that matters, whatever party you are in.

“We’re still in the pandemic and it’s very important that people behave in the way that we need them to behave, but he has lost the authority to ask people to do so.”

He said he does not care who succeeds the Prime Minister, adding: “I will take on whoever is leading.”

Conservative MP Tom Hunt said: “This comes across as incredibly hypocritical from Starmer. He’s heavily criticised the Prime Minister for something very similar.

“His refusal to apologise shows a certain degree of arrogance in my view. We’ve all seen the video of him swigging that bottle of beer and we’ll come to our own conclusions.”