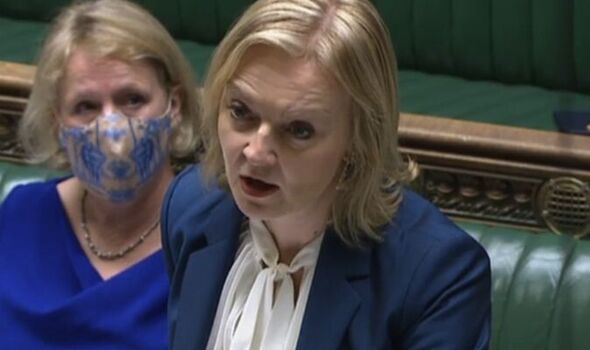 The Foreign Secretary will this afternoon update MPs on the situation in Ukraine.

It will be the first time a minister has had the chance to outline the latest to colleagues since Thursday last week, with the situation continuing to rapidly deteriorate over the weekend.

Two agreed ceasefires due to take place on Friday and Sunday broke down when Russian military opened fire on hundreds of desperate Ukrainian citizens attempting to flee the country.

Heavy shelling has also continued to take place, with areas that were prosperous built-up cities just weeks ago turned to rubble.

Ms Truss will give a statement to MPs at approximately 3.30pm.

She will outline the further humanitarian support being offered to Kiyv and update Parliament on extra measures being implemented to take action against Russian oligarchs.

The Commons is due to vote tonight on the Economic Crime Bill that will help crack down on Russian money being hidden in the UK.

Amendments set to be passed through the House include speeding up the implementation of the register of overseas entities that will allow the Government to more easily identify the flow of money.

Money is often buried in property, with the true owners hidden behind shell companies that only exist on paper, sometimes registered in offshore tax-havens.

The legislation will make it easier for the UK to sanction individuals with connections to the Kremlin.

Ministers have ratcheted up economic measures against Moscow on an almost daily basis in order to keep up pressure on Putin for his war against Ukraine.

It is hoped the sanctions will cripple the Russian economy and force a change in approach by the Kremlin.

Speaking ahead of her Commons statement, Ms Truss said the amendments would “give us the chance to bring even more crippling sanctions against Putin and his regime”.

A Foreign Office spokesman added that the new scheme would “allow the Government to move faster and harder when sanctioning oligarchs and businesses associated with the Russian Government”.

There is brand support for the plans being voted on tonight, with Labour and SNP backing the Government in the Bill.

The only division is how quickly ownership of property and land must be registered.

The Government original outlined plans to give individuals 18 months to register their assets but now want to reduce that time period to six months.

But Labour has said this would still give oligarchs linked to Russia too long, and suggested the allowance should be cut to just 28 days.

He claimed the six month time period would give Russian oligarchs a “get out of London free” card.