As the Brexit trade talks reach a critical stage, French President suggested he would speak with his German counterpart imminently. Speaking at a press conference, Mr Macron refused to speculate what the pair will be discussing when they speak. The phone call is expected to take place later today with Prime Minister Boris Johnson and Commission President Ursula von der Leyen also set for their own showdown talks.

France and Germany are considered key decision-makers in the Brexit process and have recently been at odds over what concessions EU negotiator Michel Barnier should be allowed to offer Britain.

The French government has repeatedly warned it will veto any trade deal unless Britain agrees compromise terms. 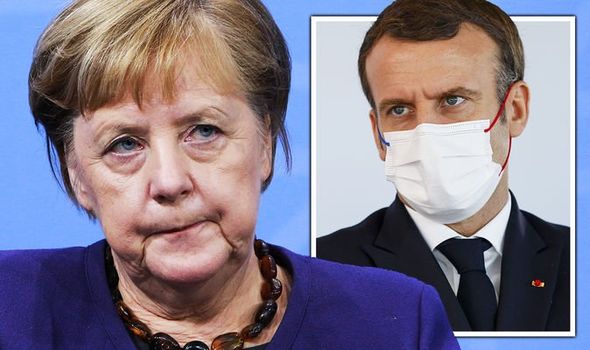 The French President has insisted the EU should be ready to walk away from the talks because a no deal would be better than a bad deal for the bloc.

Whereas Berlin is far more focused on using concessions on fishing and the so-called level playing field to secure a deal.

Mrs Merkel wants an agreement to cement her legacy before she leaves office next year.

Tags: autoplay_video, BREXIT, brexit n
You may also like
Recent News:
This website uses cookies to improve your user experience and to provide you with advertisements that are relevant to your interests. By continuing to browse the site you are agreeing to our use of cookies.Ok