The German Chancellor said France, and other European Union nations, would lose access to British waters if Britain quits the transition period without an agreement. She told a news conference: “The topic of fish isn’t the only topic which still needs to be tackled and if we can’t find an agreement with Great Britain then there will be no agreement about access to British fishing grounds, you also have to keep that in mind.” Mr Macron has become increasingly isolated in his attempt to secure the same level of access to Britain’s waters for European vessels after the end of the year.

And Boris Johnson has now warned he will walk away from negotiations with the EU unless the bloc offers significant concessions.

Mrs Merkel insisted both sides would have to compromise, including on the regulatory level-playing field.

She said: “We also need to be ready to compromise. If we want to have an agreement, then both sides need to make a move toward each other 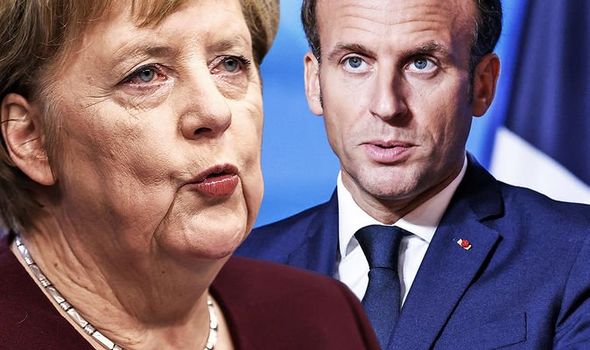 “This goes for the level playing field, as well as the question of governance and for fishing – but fishing is far from the only issue.

“The most important thing is that if we accept and recognise that the UK wants to strike out on its own path and don’t want to conform to certain rules of the single market – or it wants to introduce new aid regimes that don’t exist in the European Union – then we need to have mechanisms for the new distance between the European Union and the legal framework of the UK, on how we react and what mechanisms we have to ensure that we have fair trade relations.”

Earlier today Mr Johnson urged firms to prepare for a no-deal Brexit because he wouldn’t engage with the EU unless the bloc changed its “fundamental approach”.

The Prime Minister said: “From the outset we were totally clear that we wanted nothing more complicated than a Canada-style relationship based on friendship and free trade. To judge by the latest EU summit in Brussels that won’t work for our EU partners. They want the continued ability to control our legislative freedom, our fisheries, in a way that is completely unacceptable to an independent country.

“And since we have only ten weeks until the end of the transition period on January 1, I have to make a judgment about the likely outcome and to get us all ready. And given that they have refused to negotiate seriously for much of the last few months, and given that this summit appears explicitly to rule out a Canada-style deal, I have concluded that we should get ready from January 1 with arrangements that are more like Australia’s, based on simple principles of global free trade. And we can do it, because we always knew that there would be change on January 1, whatever type of relationship we had.

“And so now is the time for our businesses to get ready and for our hauliers to get ready, for our travellers to get ready, and of course we are willing to discuss the practicalities with our friends where a lot of progress has already been made, on such issues as social security and aviation, nuclear cooperation, and so on. But for whatever reason, it is clear from the summit that after 45 years of membership, they are not willing, unless there are some fundamental change in approach, to offer this country the same terms as Canada.”

Dutch prime minister Mark Rutte said the intervention was “positive” and said the EU would now have to work on a compromise offer.

He told a news conference European capitals must accept that won’t secure 100 percent of their demands in any post-Brexit trade deal with Britain.

Mr Rutte said: “We will not get 100 percent of what we want, that’s impossible in a negotiation, you always have to find compromise.”

But France’s Emmanuel Macron stood firm and refused to back down in the row over a post-Brexit trade deal.

He said: “It’s not the job of the leaders of the 27 countries who have decided to stay in the EU to keep the British Prime Minister happy.

“The British, whatever we told them during the vote, needs the EU’s single market. They depend more on us, than we depend on them.

“The British proposal is to get access to the single market without respecting the rules.

“It’s unacceptable. We would put the single market in an impossible position would allow to have permanent dumping by the British.”