The Brussels diplomat said the pair met to pave the way for Boris Johnson and Ursula von der Leyen take take control of the negotiations. Speaking after their first meeting of the day, Mr Barnier said: “I just met David Frost this morning to prepare the next steps, and, obviously, the meeting between Boris Johnson and Ursula von der Leyen. “At that stage, more than ever, Brexit is a school of patience… even a university of patience.”

Insiders claim the chief negotiators are trying to hammer out an agenda of little more than “two or three” outstanding issues for the political leaders to thrash out a compromise.

The European Commission said negotiations would likely continue after the high-level meeting, which is still yet to be scheduled.

A spokesman said: “That’s not where the negotiations happen. The meeting will be to try and lift substantial impasses so then the negotiators can continue their work. 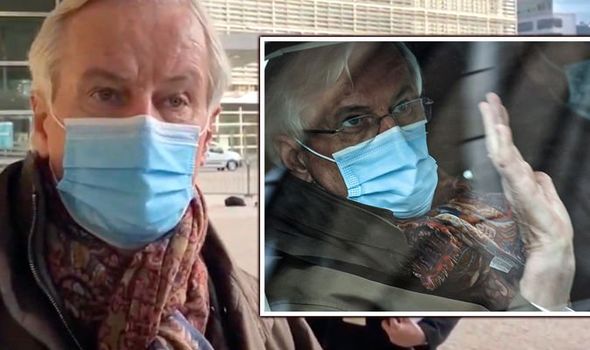 “We’re willing to continue the discussions for as long as necessary.”

In the event of a no-deal Brexit, the bloc could push for fresh negotiations in the new year.

The spokesman added: “If that deal is not in place on the January 1 then we have a no deal situation.

Ahead of his trip to Brussels, Mr Johnson said he was “optimistic” a deal can be struck, but insisted the EU would have to show “sweet reason” to get it over the line.

The Prime Minister said: “You’ve got to be optimistic, you’ve got to believe there’s the power of sweet reason to get this thing over the line.

“But I’ve got to tell you it’s looking very, very difficult at the moment.”

Mr Johnson will brief Cabinet ministers before he heads to the Continent for the in-person showdown.

The French government’s threat of a veto still hangs over the talks with Paris refusing to drop its hardline demands for future fishing rights.

Clement Beaune, France’s Europe minister, who is a close ally of President Macron, said his boss was ready to block the trade deal unless its fishermen are granted generous access to UK fishing grounds.

Mr Beaune said: “It is complicated and we do not want to act under pressure because there are two things that are very concrete for the French, for the Europeans, for our companies: the first is fishing, which is extremely important to French regions such as Haute France, Normandy, Brittany.

“We don’t accept that the British block access to their waters. It’s not possible. We make efforts and compromises, and we have said so to fishermen, but we will not sacrifice our fisheries and our fishermen. And the British know that.”

He insisted Paris was prepared to veto a “bad” deal for French fishermen.

Mr Beaune added: “Yes, we are a bit fed up, but we’re not going to stop knocking on the door because we’re tired. And it’s Michel Barnier who negotiates for us.

“When the deal is on the table, we’ll take a look and analyse it to see if it defends our fishermen well or not. If we see that the deal is worse than not having an agreement, we will not hesitate, like all other countries can, to reject it.

“We still have time for negotiations. A few days, at least. After that, we have to be clear to our companies, to our fishermen… and say yes or no, deal or no deal.

The threat is likely to hang over over Mr Johnson’s efforts to unlock the trade talks when he travels to Brussels for showdown talks later this week.”