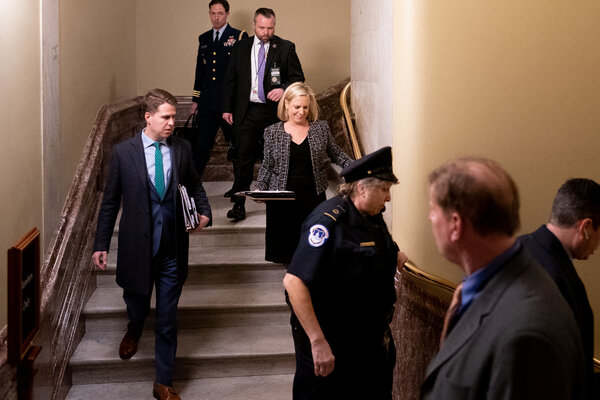 WASHINGTON — Miles Taylor, the former chief of staff at the Department of Homeland Security, was the anonymous author of The New York Times Op-Ed article in 2018 whose description of President Trump as “impetuous, adversarial, petty and ineffective” roiled Washington and set off a hunt for his identity, Mr. Taylor confirmed Wednesday.

Mr. Taylor was also the anonymous author of “A Warning,” a book he wrote the following year that described the president as an “undisciplined” and “amoral” leader whose abuse of power threatened the foundations of American democracy. He acknowledged that he was the author of both the book and the opinion article in an interview and in a three-page statement he posted online.

Mr. Taylor resigned from the Department of Homeland Security in June 2019, and went public with his criticism of Mr. Trump this past summer. He released a video just before the start of the Republican National Convention declaring that the president was unfit for office, and he endorsed Joseph R. Biden Jr., the Democratic presidential nominee.

But Mr. Taylor, who had repeatedly denied being Anonymous, did not reveal himself to be the author of the opinion article and book at the time. Confronted with Mr. Taylor’s public criticism in August, the president wrote on Twitter that he was a “DISGRUNTLED EMPLOYEE named Miles Taylor, who I do not know (never heard of him).”

The Op-Ed pages of The Times are managed separately from the news department, which was never told of Anonymous’s identity.

Mr. Taylor served for two years as a top aide to Kirstjen Nielsen, Mr. Trump’s third homeland security secretary, and wrote in The Times that he was part of a cadre of officials around Mr. Trump who were quietly working to “frustrate parts of his agenda and his worst inclinations.”

As a senior administration official, Mr. Taylor often interacted with the president at the White House, particularly on issues related to immigration, cybersecurity and terrorism. He left government after Ms. Nielsen was fired and later became the head of national security relations for Google. He has been on personal leave from the company for the past several months after endorsing Mr. Biden and has been organizing other Republicans to campaign against Mr. Trump’s re-election.

“More than two years ago, I published an anonymous opinion piece in The New York Times about Donald Trump’s perilous presidency, while I was serving under him. He responded with a short but telling tweet: ‘TREASON?’” Mr. Taylor wrote in his statement. 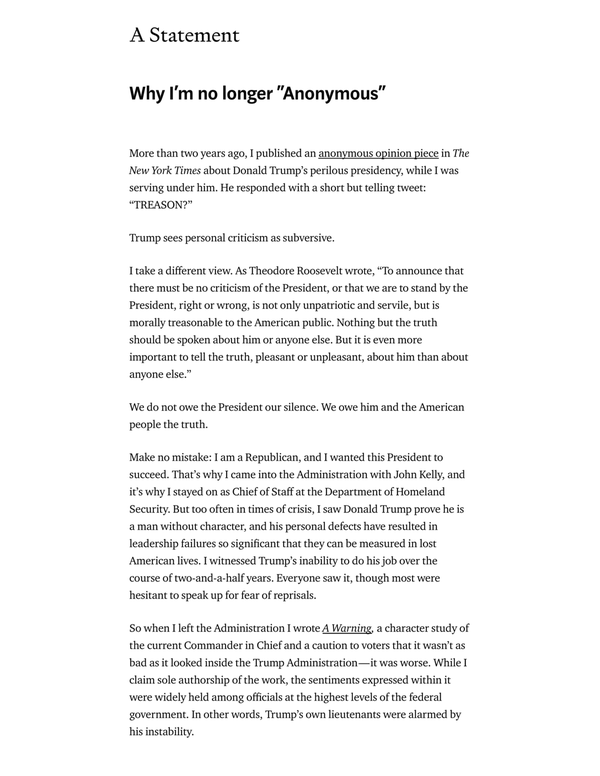 Read the Statement by Miles Taylor

Miles Taylor, the former chief of staff at the Department of Homeland Security who was the anonymous author of the New York Times Op-Ed two years ago, released a statement on Wednesday.

“When I left the administration, I wrote ‘A Warning,’ a character study of the current commander in chief and a caution to voters that it wasn’t as bad as it looked inside the Trump administration — it was worse,” he added.