WASHINGTON — The Justice Department lodged charges on Friday against six more suspected members of the Oath Keepers, adding new defendants to a case that had already accused others in the right-wing militia group of an organized plot to attack the Capitol on Jan. 6 and stop the final certification of the presidential election.

The charges, filed in Federal District Court in Washington, accused Kelly Meggs, the self-described leader of the Oath Keepers’ Florida chapter, and his wife, Connie, of joining four other militia members — including a middle-aged couple from Ohio — in a military-style “stack” that ascended a flight of stairs outside the Capitol and then broke into the building. The group of six, court papers say, worked with the three members of the Oath Keepers who were charged last month: Thomas E. Caldwell, Jessica M. Watkins and Donovan Crowl.

The new indictment against what is now a total of nine Oath Keepers represents the most significant effort by the government so far to prove that far-right extremists worked together in advance of Jan. 6 to prevent Congress from certifying President Biden’s victory and to help former President Donald J. Trump keep hold of power.

Indeed, prosecutors say, in late December, Mr. Meggs wrote a message on Facebook echoing a tweet that Mr. Trump had posted, saying that a rally in Washington on Jan. 6 to protest the results of the election would be “wild.” 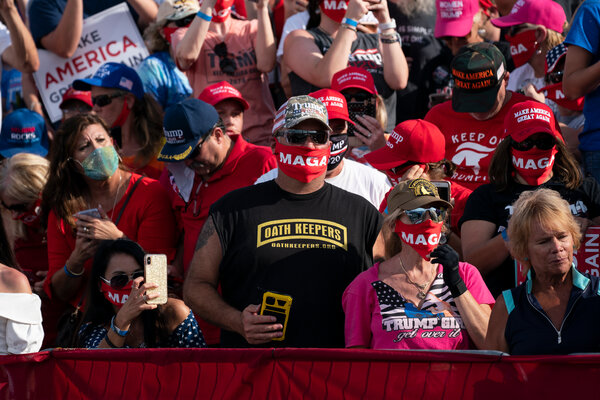 According to previously filed court papers, the Oath Keepers began working to undermine Mr. Biden’s win within a week of Election Day in November, setting up training sessions for “urban warfare” and “riot control,” and discussing a plot to ferry heavy weapons into Washington on a boat across the Potomac River. Ms. Watkins in particular, prosecutors say, was “awaiting direction” from Mr. Trump as early as mid-November about how to deal with the election results.

The Oath Keepers, founded by former members of the military and law enforcement, have a long history of antigovernment activity and have emerged — along with the far-right nationalist group the Proud Boys — as one of the most prominent extremist groups to have baselessly questioned the validity of the election and to have taken part in the storming of the Capitol.

Within a week of Election Day, for instance, the Oath Keepers’ founder, Stewart Rhodes, told the conspiracy theorist Alex Jones that he had men stationed outside Washington prepared to act at Mr. Trump’s command. At a rally in the city on Dec. 12, Mr. Rhodes called on Mr. Trump to invoke the Insurrection Act, suggesting that a failure to do so would result in a “much more bloody war.”

Echoing earlier filings, the new indictment notes that on Jan. 4, Mr. Rhodes issued a call to action on his organization’s website urging “all patriots” to “stand tall in support of President Trump’s fight to defeat the enemies foreign and domestic who are attempting a coup.” The repeated references in the filings to Mr. Rhodes, a former soldier and a graduate of Yale Law School, suggest that prosecutors may be trying to build a case against him as well.

According to prosecutors, the Oath Keepers began conspiring to overturn the election not long after votes were cast in November. On Nov. 9, prosecutors say, Ms. Watkins, a 38-year-old bar owner from Ohio, sent a text message to several recruits telling them they needed to be “fighting fit” by Inauguration Day. Shortly after, court papers say, she suggested to her recruits that they use the chatting app Zello to communicate with one another during “operations.”

When asked by a recruit the following week what 2021 might hold, Ms. Watkins admitted that Mr. Biden might actually become the president, prosecutors say. “If he is, our way of life as we know it is over,” she wrote. “Our Republic would be over. Then it is our duty as Americans to fight, kill and die for our rights.”

In early December, court papers say, another person charged in the case, Graydon Young, 54, reached out to the Florida chapter of the Oath Keepers looking to become involved with the group while Mr. Crowl, a Navy veteran from Virginia, attended a training camp in North Carolina. By the end of the month, the militia members had set their eyes on Mr. Trump’s Jan. 6 event in Washington and were arranging lodging in the city and coordinating with other groups of Oath Keepers coming up from North Carolina and Mississippi, prosecutors say.

The riot inside the U.S. Capitol on Wednesday, Jan. 6, followed a rally at which President Trump made an inflammatory speech to his supporters, questioning the results of the election. Here’s a look at what happened and the ongoing fallout: