This morning the European Commission President said: “I can tell you that there is a path to an agreement now. The path may be very narrow but it is there.” But hitting back, a UK official said the two sides have still failed to break the deadlock on key areas.

They said: “We’ve made some progress, but we are still very far apart in key areas. Still not there.”

Speaking to MEPs this morning Ms von der Leyen said the issue of “governance” had now largely been agreed.

The two areas have left talks deadlocked for months, with little progress made on the issues by the EU’s Chief negotiator Michel Barnier or the UK’s Lord Frost. 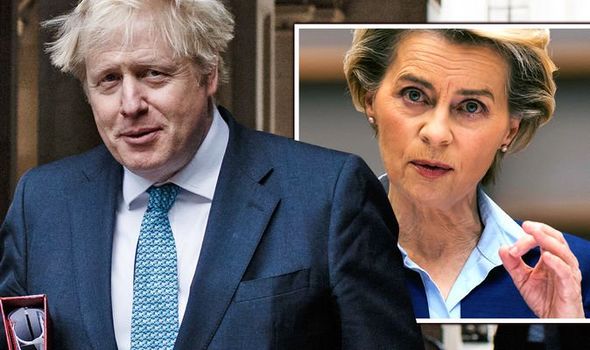 “I am glad to report that issues linked to governance now have largely been resolved.

“The next days are going to be decisive.”

Whispers of a trade deal being close to completed were spreading around Westminster last night, with Brexiteer Tory MPs fearful the Prime minister would cave on his red lines in order to secure a deal.

However, Boris Johnson has sought to calm fears of his backbenchers, sending them a WhatsApp vowing to walk away if needed.

He said: “Never fear folks we will vindicate the people in full or else as I have said many times we will start the new year WTO terms!”