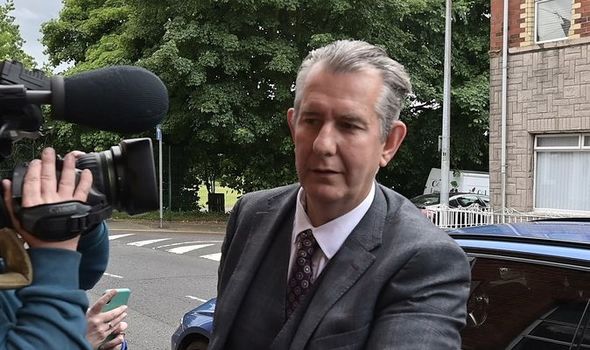 Mr Justice Colton said he was issuing an interim order until a judicial review of the DUP minister’s decision can be heard in full. Mr Poots acted unilaterally to stop Northern Ireland Protocol port checks this week and the move has been challenged in two separate applications in Belfast’s High Court. Civil servants have yet to implement the instruction, pending legal clarity on their obligations, and checks are continuing.

Mr Justice Colton granted leave for applications for judicial reviews of the NI Assembly agriculture minister’s decision, saying: “There shouldn’t be any confusion hanging over those in the civil service.”

A barrister for the agriculture department told the court that their position was that the direction by Mr Poots was “entirely lawful”. The full judicial review is expected to be heard next month. Meanwhile, a political crisis in the region has been sparked by the resignation of DUP First Minister Paul Givan.

The DUP would have difficulty reforming a Stormont executive after the upcoming Assembly election if issues with the protocol were not resolved, its party leader warned. Sir Jeffrey Donaldson’s decision to pull Mr Givan out of office is in protest at the post-Brexit trading arrangements that have created economic barriers between Northern Ireland and the rest of the UK.

Mr Givan’s resignation automatically removed Sinn Fein Deputy First Minister Michelle O’Neill from her post. Other Stormont ministers can remain in post but the Executive can no longer meet and is unable to take significant policy decisions.

Sir Jeffrey warned: “Clearly if the protocol issues are not resolved by the time of the election then, of course, it is difficult for us to form a government because of the instability that the protocol creates. I have made my position clear – I think there is now an opportunity for the Government and the EU to step up.

Instability “The EU said consistently that the purpose of the protocol was to protect the political institutions, political stability and the Good Friday Agreement. Well, we know that isn’t happening because unionists do not consent to the protocol. There is no consensus for the protocol.” The Assembly poll, scheduled for May, could now be brought forward.