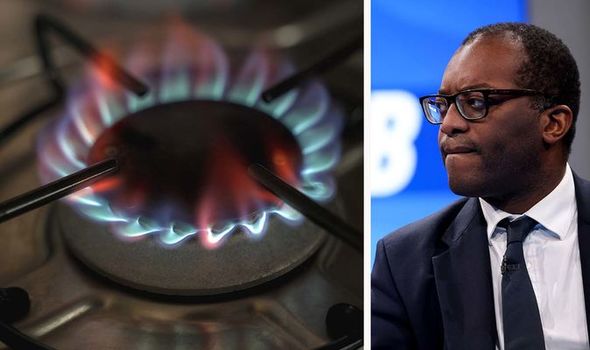 Kwasi Kwarteng, who has been tasked with tackling the energy and lorry driver crisis, insists the UK will be fine in the short term and that the Government is also working on long-term solutions. Prime Minister Boris Johnson is understood to be pushing for a greater reliance on nuclear energy, driving down the price of electric cars and looking at ways for vehicles and traditional home boilers to be run off hydrogen gas much more cheaply.

Mr Kwarteng’s intervention comes as signs of panic buying returned to supermarkets, just as recent queues at petrol stations had begun to subside.

With pig farms joining HGV firms and the poultry industry demanding more cheap migrant labour, there is increasing anger among ministers over businesses refusing to restructure.

Sources close to Mr Kwarteng say he is adamant that industry should not “reach to the top shelf for the crack cocaine of cheap migrant labour”. He has said he wants them to pay higher wages instead.

But with the gas price crisis foremost on the agenda, Mr Kwarteng said today: “I want to reassure Sunday Express readers of the safety net that we have in place to shield consumers from instant price hikes this Christmas, and ensure everyone gets the supply they need.

“Because that’s always my first, main concern ‑ protecting ­consumers and particularly those on lower incomes.

“Despite some who are pushing me to lift the cap, I am ­absolutely clear it is here to stay and will remain at the same level throughout winter.”

Mr Kwarteng insisted that the price cap is working, with current wholesale gas prices around £2.50 a therm ‑ the unit used to measure gas ‑ while the price cap is holding down prices at 65p.

He insisted: “Keeping this protection in place is non-negotiable for me.

“And it’s important to say this is a UK specific policy ‑ energy customers in other countries like France and Germany don’t enjoy those same protections.”

The Business Secretary has suggested that nuclear energy could form the backbone of the future energy supply, while ­criticising France and Germany for making themselves dependent on Vladimir Putin’s proposed Nord Stream 2 gas line.

He added: “The Government has deep concerns about Nord Stream 2 and its implications for European energy security.

“It is vital to remember that the UK’s energy system does not rely on gas from Russia.”

Its chairman Dr Richard Leese said he has put forward three “technical” proposals to the Government to avoid interruption to supply chains.

Dr Leese told BBC Breakfast yesterday: “It’s needed right now. Gas prices are at an unprecedented level and the businesses that manufacture the goods that we need are trying to operate under unprecedented conditions.

“The measures we laid out in front of the Secretary of State yesterday will go some way to alleviating the pain and we really need action for this winter.”

Meanwhile, following a newspaper report yesterday, sources close to Mr Johnson denied there are any plans for an immediate tax hike on gas.

The sources said: “In the 2020 Energy White Paper, we committed to publish a Call for Evidence on ‘price distortions’ between electricity bills v gas bills.

“That review has not been published yet.

“The problem is that electricity is greener than ever ‑ but taxed more. Gas is more polluting ‑ but taxed far less. Hence the ‘price distortion’.

“As we move to a world where we use more electricity to heat our homes and charge our cars, we need to address the artificially high price of electricity.

“The review will look into these ‘price distortions’ with a view to bringing down the price of electricity over many years.

“One option could be to shift these levies on to gas bills instead over many years.”

The UK is not alone in the supply crisis. Yesterday Lebanon was plunged into darkness after a diesel shortage shut down the country’s two biggest power ­stations. Officials have warned that electricity could be out for a number of days.

Europe itself has a shortage of 400,000 HGV lorry drivers.

Yesterday Education Secretary Nadhim Zahawi unveiled a raft of new training measures to get more of them on the roads quickly.

The minister has announced 2,000 additional places to be created on fast-track courses that will support more people to become HGV drivers.

This means up to 5,000 people will be trained via Skills Boot-camps in HGV driving courses.

This is an expansion of the Government’s new training route first announced last month, and backed by £17million.

The 16-week courses are set to start soon with the first places available from November.

This will mean that the first fully trained HGV drivers should be road ready as early as February next year.

“To help more people into the industry, we’re expanding our Skills Bootcamps offer to support 5,000 people to gain the skills they need to be road ready, and to help those with previous ­experience refresh their skillset so they can get back on the road.”

The Government has put in a temporary visa allowance of 5,500 poultry workers until December 31 and 4,700 HGV food drivers until February 28 next year.

But it is understood ­ministers are sceptical that an inability to bring in migrant workers is the problem.

A source close to Home Secretary Priti Patel noted that 9,000 of 30,000 visas for fruit pickers have gone unused.

The senior source added: “Why aren’t they filling the quota they have got instead of demanding more visas?”

Defra refused to confirm how many visas have been issued.

But the National Farmers’ Union insisted the scheme was of “critical” importance and called for it to be made permanent.

Vice president Tom Bradshaw said: “A short-term Covid Reco-very Visa alongside a permanent Seasonal Workers Scheme would be an effective and, frankly, vital route to help the pressing needs of the industry today.

“It would also give us time to invest in the skills and recruitment of our domestic workforce, helping to provide long-term stability so we can recruit the people we need to continue to deliver ­quality, nutritious and affordable food for the nation.”