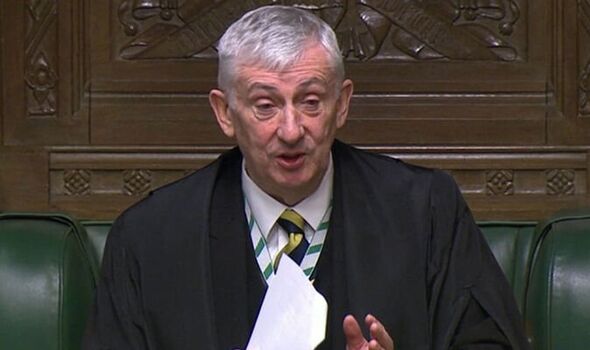 When Sir Lindsay was elected to chair House of Commons debates, he promised to be a stickler for keeping to schedule.

He vowed to return PMQs to its traditional length of just half an hour after proceedings under Mr Bercow’s watch regularly extended far beyond their allotted time.

Prior to Mr Bercow taking up his role in the chair in 2009, the average PMQs duration was just over 30 minutes.

When Sir Lindsay took charge just before the December 2019 general election, Prime Minister Boris Johnson joked he hoped the newly appointed Speaker would “stick to a strict Newtonian concept of time in PMQs”.

Cracking down on the lengthy sessions, the first PMQs of 2020 was the shortest in duration for three years.

It lasted just 33 minutes as the Speaker looked to reign in on rambling questions and answers.

However, two years later there are concerns Sir Lindsay is letting PMQs once again disrupt the parliamentary schedule.

Analysis by Express.co.uk shows that the average length of the weekly session taking place on Wednesdays at midday has extended to 41 minutes.

It means so far this year PMQs has overrun by more than a third of its allowed time slot.

One session, on March 16, even took as long as 55 minutes, almost double the length of time it is meant to.

On that occasion Deputy Prime Minister Dominic Raab was sparring with Labour’s Angela Rayner as the pair took the place of their party leaders due to Mr Johnson being out of the country.

There are fears of PMQs continuing to grow in length in the months ahead.

One MP told Express.co.uk: “Lindsay Hoyle was very particular about wanting to cut it down.

“There’s a balance to be struck between how long you keep the Prime Minister in front of the House and to make sure as many MPs get the chance to put forwards their questions.”

They said no one wanted to go back to PMQs being the length it was under Mr Bercow.

The parliamentarian continued: “If you look at how long the principle opposition and the SNP questions take, they do go on and on.

But admitting Sir Lindsay had taken his own approach to his predecessor, they added: “Hoyle is very different to Bercow.”