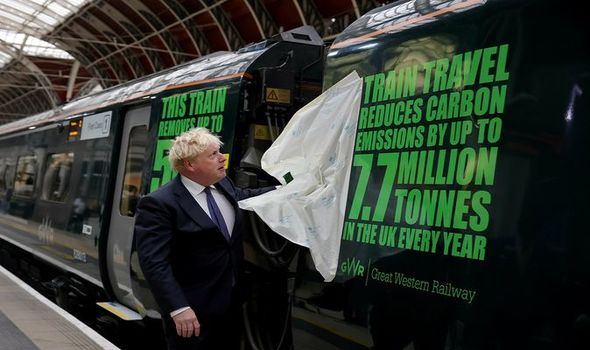 The Prime Minister welcomed almost £6billion of investment from abroad which has helped to secure tens of thousands of jobs. Mr Johnson was gathering his top team today for a meeting away from Downing Street as he seeks to portray the country as a beacon for green investment. Ministers will meet in south-west England, with the Prime Minister claiming that a combination of Government support and “British zeal for innovation and commerce” has put the nation at the forefront of a green industrial revolution.

Mr Johnson will chair the summmit after returning from a holiday in Marbella. Since November 2020, when the Prime Minister set out a 10-point plan for a greener economy, there has been some £5.8billion of investment that is either already benefiting the UK or which is committed.

Downing Street aides said the investments which have been announced already would create or secure 56,000 jobs. The focus on green employment comes just weeks before the UK hosts the United Nations COP26 climate change summit in Glasgow.

Ahead of the international conference, the Government is expected to publish its longawaited net zero strategy – setting out how it proposes to cut greenhouse gas emissions by 2050.

Heralding the latest investment data, Mr Johnson insisted that “these new figures are yet more evidence that going green means creating high-quality jobs across the United Kingdom. He said: “We are at the forefront of seizing these new opportunities, supported by major Government investment and a British zeal for innovation and commerce.”

Investments highlighted by ministers included commitment by Nissan and partner Envision to an electric vehicle hub in Sunderland and chemical giant Ineos’s £1billion plan to convert Grangemouth refinery to run on hydrogen.

Also, £100million has been announced by Vauxhall’s parent firm Stellantis to transform its 1960s Ellesmere Port factory in Wirral into a manufacturing site that will be dedicated to producing electric vehicles. The special Cabinet meeting comes ahead of a Global Investment Summit taking place in London next week, which is aimed at attracting further funds from overseas firms.

Business and Energy Secretary Kwasi Kwarteng said: “The UK is fully capitalising on the global green industrial revolution, showing the world how business and industry can remain competitive and attract international investment in this race to secure new green industries.

“As we power on to back new British industries – from car battery makers to wind turbine designers – we are laying the foundations for a new era of green jobs and decades of economic growth to come.”

10 WAYS TO MAKE OUR COUNTRY CLEANER