WASHINGTON — In the weeks after the deadly Capitol riot on Jan. 6, federal prosecutors in Washington devised a broad plan to root out possible conspirators, according to two people briefed on it: pull together the names of an array of people who may have known the assailants, and investigate them for ties to the attack.

Those lists, the prosecutors proposed, could include organizers of the rally where President Donald J. Trump spoke just before the assault, anyone who helped pay for rioters to travel to Washington and any member of the far-right extremist groups that were represented in the crowd that day.

Two of the prosecutors — trial lawyers leading the riot inquiry — presented the plan to the F.B.I. in late February, along with a document of about 25 pages that laid out the strategy with an eye toward uncovering possible conspiracies between the attackers and others, according to the people, who spoke on the condition of anonymity to discuss an active investigation.

The aggressive plan was in keeping with the Justice Department’s public vow to charge those who participated in the attack on the Capitol. But F.B.I. officials balked, citing concerns that the plan appeared to suggest investigating people without any evidence that they had committed crimes and that it violated bureau policy and First Amendment protections. It is not against the law to join organizations, including extremist groups, nor to participate in a protest or fund travel to a rally.

F.B.I. officials expressed their concerns to officials in the main Justice Department in Washington, who ultimately quashed the plan.

Still, the decision by top F.B.I. and Justice Department officials to overrule task force prosecutors came at a crucial time for the high-profile, sprawling investigation as the public and Biden administration officials were demanding accountability for the riot and a push to combat domestic extremism.

Spokesmen for the Justice Department and the F.B.I. declined to comment.

The proposal also shows the balancing act that the newly confirmed leaders of the Justice Department face as they seek to counter domestic extremism and prevent terrorism without violating Americans’ civil liberties. The F.B.I. has previously faced criticism for its response to the terrorist attacks on Sept. 11, 2001, aspects of which were condemned as an assault on civil liberties, and its Cointelpro campaign in the 1950s and 1960s to spy on civil rights leaders and others. 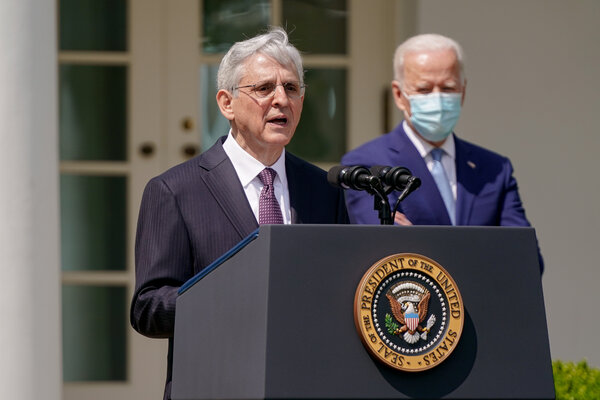 Attorney General Merrick B. Garland said last week that even when he led the investigation into the 1995 Oklahoma City bombing during an earlier stint at the Justice Department, investigators were cognizant that they needed to ensure that Americans’ civil liberties were protected.

F.B.I. officials have emphasized the bureau’s efforts to stay within its limits when investigating protected activity. While preventing terrorism in the United States is a priority, “no investigation can be opened based solely on First Amendment protected activity,” Michael McGarrity, then the head of the F.B.I.’s counterterrorism division, said in House testimony in 2019.

The bureau relies in large part on its vast network of informants, who provide tips and intelligence that can be used to open an investigation, current and former members of the F.B.I.’s Joint Terrorism Task Force said. But agents cannot investigate people simply because they are members of groups that espouse violent, racist or antigovernment ideologies.

Prosecutors in Washington ran up against that constraint as they sought to identify and track down people who had participated in the Jan. 6 attack. They were also investigating whether the assault was more than a spontaneous riot that broke out after an emotionally charged rally that was capped by Mr. Trump’s exhortations to his supporters to challenge Congress’ certification that afternoon of the election.

By February, some of the prosecutors began to express frustrations that they were being stymied by top Justice Department officials who were overseeing the inquiry in the weeks before Mr. Garland and other Biden appointees were sworn in.

The prosecutors had wanted to know more about who had been talking to Stewart Rhodes, the leader of the Oath Keepers, a militia whose members have figured prominently in conspiracy cases charged by the government in connection with the attack.

In a message on the Oath Keepers’ website, Mr. Rhodes had urged members to come to Washington and “stand tall in support” of Mr. Trump. He was also part of an operation to provide security to Mr. Trump’s close associates, including Roger J. Stone Jr., who spoke at the rally that day.

Prosecutors wanted to obtain a search warrant for Mr. Rhodes. For years, militias like the Oath Keepers and far-right nationalist groups like the Proud Boys had managed to largely evade F.B.I. scrutiny, as their protests and other public activities stayed within the bounds of the law.

But with members of such groups at the Capitol on Jan. 6, some prosecutors expressed hope that they now had cause to investigate their associates and their leaders.

But the law does not prohibit urging people to attend a protest or to support a politician, even if the statements are provocative; and investigators did not find evidence that Mr. Rhodes had helped arrange anything more than bodyguards for the speakers.

Justice Department officials, including Matthew S. Axelrod, then the No. 2 official in the deputy attorney general’s office, and Michael R. Sherwin, an official who was overseeing the Jan. 6 inquiry at the time, denied prosecutors’ request to seek a search warrant for Mr. Rhodes, according to two people briefed on the deliberations. They concluded that the prosecutors lacked probable cause to do so without violating his civil liberties and rights.

After that dispute, two of the lead task force prosecutors contacted the F.B.I.’s domestic terrorism operations section to brief investigators on their proposed strategy to scrutinize the riot. They suggested that investigators look at rally organizers and organizations like militia groups.

Among the F.B.I. officials who opposed the approach were the deputy director, Paul M. Abbate, according to the people briefed on the plan. After bureau officials discussed the presentation with Justice Department officials, leaders in the deputy attorney general’s office informed Channing D. Phillips, the acting U.S. attorney in Washington, that prosecutors would not take such an approach to the investigation.

The investigation, which continues to be led by federal prosecutors and F.B.I. agents in Washington, has led to the arrests of over 400 defendants in at least 45 states. About 30 have been charged with more serious felonies, including conspiracy, according to figures released by the Justice Department.

Tags: Storming of the US Capitol (Ja
You may also like
Recent News: