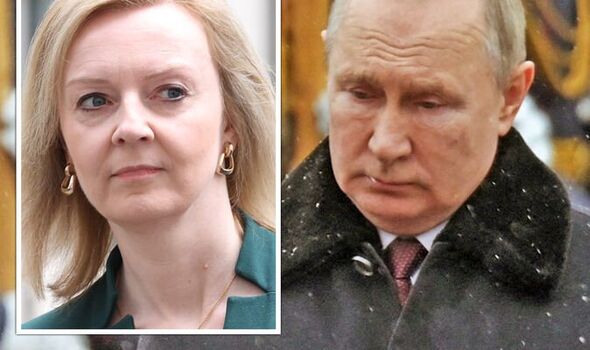 Speaking in Poland after holding a meeting with her counterpart, Zbigniew Rau, Ms Truss said it was “urgent” for the West to step up sanctions and supply more weapons to Ukraine to defend itself.

The Foreign Secretary blasted Russia’s “reckless disregard for civilian lives and their nationhood” as she condemned shocking images of barbarism that have emerged in recent days.

Mass graves have been discovered in areas where Russian forces had withdrawn from around Kyiv and there have been reports of the military using rape as a way to terrorise the civilian population.

Britain has announced its intention to impose even more economic measures to punish Moscow, adding the action taken so far has “had a crippling impact on those who feed and fund Putin’s war machine”.

She said: “Today, I can announce that we have frozen over $350billion (£266billion) of Putin’s war chest, making over 60 percent of the regime’s $604billion (3460billion) foreign currency reserves unavailable.

“Our coordinated sanctions are pushing the Russian economy back into the Soviet era.

“But we can and must step up.”

There has been frustration in the UK at the failure of EU member states to set out a timetable for reducing their reliance on Russian imports.

The bloc agreed last month that it would end imports, but sources say there is irritation in the British Government at the failure to set out a hard deadline or roadmap to easing the use of Russian gas.

European Commission President set out a fresh range of sanctions earlier today, including banning the import of coal, but failed to outline further action on gas.

Germany is understood to be one of the biggest obstacles to ending reline on gas imports due to its heavy reliance on the power source.

Berlin has said it hopes to end Russian coal imports this summer and oil imports by the end of the year, but halting gas will take longer.

Prime Minister Boris Johnson is likely to urge Germany to set a date for phasing out Russian gas when he meets the country’s Chancellor, Olaf Scholz, in Downing Street on Friday.

Ms Truss said she would use a meeting of the G7 on Thursday to urge international partners to take further action by: “Banning Russian ships from our ports, cracking down on Russian banks, going after new industries filling Putin’s war chest like gold, and agreeing a clear timetable to eliminate our imports of Russian oil and gas”.

In a clear message to the Kremlin, the Foreign Secretary added: “The only way to end this war is for Putin to lose in Ukraine.”