The Foreign Secretary made the remarks during a trip to New Delhi as India and the UK seek to restart economies battered by the coronavirus pandemic. Mr Raab also took a veiled swipe at the EU as he praised the UK’s newfound ability to strike Free Trade Agreements across the world once free from Brussels rules post-Brexit.

He said: “I think we have been too myopically focused just on Europe.

“But one of the advantages of leaving the transition period is we gain control over our ability to strike trade deals with India and the rest of the word.”

Speaking after four-hour talks with Indian Foreign Minister S. Jaishankar, who said there was “a serious intent” to deepen trade between the Anglophone nations, Mr Raab said the two foreign ministers “would like to nudge our trade negotiators along and see what we can achieve.”

He said: “What I think we recognise is the possibilities of a deeper trading relationship.

“The contours of our economies would allow that and we, certainly, as foreign ministers see a very powerful strategic case.” 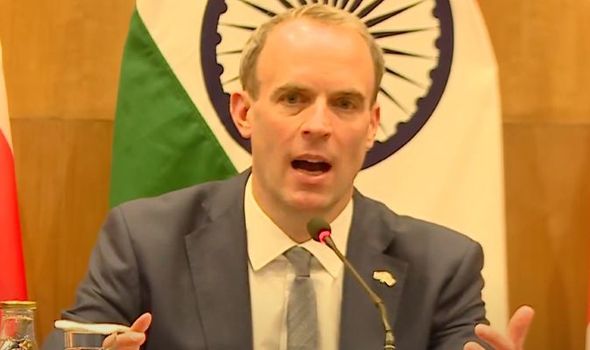 Tags: ctp_video, Dominic Ra, headlines
You may also like
Recent News:
This website uses cookies to improve your user experience and to provide you with advertisements that are relevant to your interests. By continuing to browse the site you are agreeing to our use of cookies.Ok