WASHINGTON — When Senator David Perdue of Georgia didn’t show up for a debate on Sunday night, he ensured two outcomes: Jon Ossoff, Mr. Perdue’s Democratic opponent, would enjoy free airtime unencumbered by attacks from his rival, and the other Senate debate that night would draw far more attention.

Handing Mr. Ossoff an open microphone, Republicans determined, was well worth the bargain.

As Georgians prepare to vote in two runoffs next month that will decide control of the Senate, there is little mystery as to which of the two Democratic candidates G.O.P. officials want to elevate as a target as they try to rouse their base: the Rev. Raphael Warnock, who is running against Georgia’s other Republican senator, Kelly Loeffler.

Ms. Loeffler made plain the Republican strategy when she called Mr. Warnock a “radical liberal” 13 times in their debate on Sunday evening. She repeatedly invoked his past criticism of police officers and a sermon in which he once said that “nobody can serve God and the military,” a theme that has roots in biblical passages.

Her plan of attack followed a similar portrayal by President Trump during his rally on Saturday in Valdosta, Ga., where Republicans played a video that likened Mr. Warnock to the Rev. Jeremiah Wright, the Chicago pastor whose comments drew scrutiny to his relationship with Barack Obama in the 2008 campaign. The video included footage of Mr. Wright famously saying “God damn America.”

That same critique has been echoed by other Republican surrogates, who have spent more time focusing on Mr. Warnock than Mr. Ossoff.

“This is a man who celebrated Jeremiah Wright, the radical pastor who was so far to the left that even Barack Obama had to repudiate him,” Senator Tom Cotton of Arkansas said during a stop in Georgia last month.

Making Mr. Warnock, the pastor of Atlanta’s storied Ebenezer Baptist Church, the face of the opposition for the Jan. 5 election — rather than Mr. Ossoff, a young white documentary filmmaker — represents a two-pronged strategy.

Spotlighting a Black candidate and linking him to the state’s most prominent African-American Democrat, Stacey Abrams, amounts to a strategy to motivate turnout among white conservatives, especially those who harbor racist views and are uneasy about Black leadership. Mr. Warnock would be the first Black Democratic senator from the South. 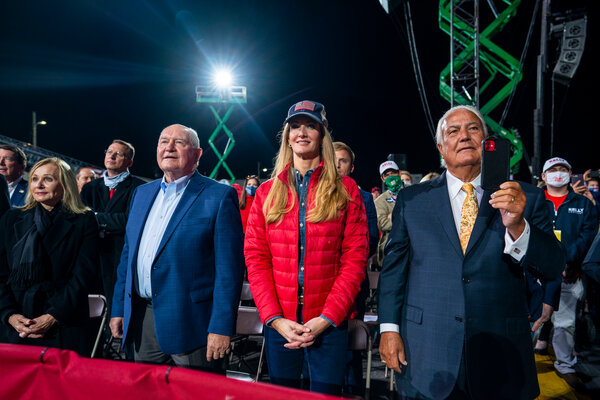 The run-against-Warnock approach, though, also takes a page out of the national Republican Party’s playbook for the 2020 campaign. Republicans found great success in down-ballot races, against mostly white candidates, by tying them to the most liberal figures and ideas in the Democratic Party — like defunding the police, which Mr. Warnock does not support.

These attacks, delivered without overt references to race, may prove enough to persuade the multiracial coalition of suburbanites who swung to Joseph R. Biden Jr. in the presidential contest to vote next month for the two Republicans and ensure a G.O.P.-controlled Senate.

“Both are political newcomers with thin paper trails,” the Republican strategist Liam Donovan said of the two Democratic candidates, “but Warnock gives you a lot more to aim at than Ossoff, especially on familiar themes that resonate with G.O.P. audiences. Ossoff is just too dull to make a useful political caricature of.”

Republicans have another imperative when it comes to Mr. Warnock: Because Ms. Loeffler spent much of her focus and money fending off Representative Doug Collins, a Republican, in the first round of voting last month in the Senate race, Mr. Warnock emerged from November with the lowest unfavorable ratings of the four candidates vying for the two seats.

Ms. Loeffler, who was appointed to her seat last December and is a first-time candidate, is seen by officials in both parties as the more vulnerable of the two Republicans; she has slightly underperformed Mr. Perdue in the small set of polling that has been released since the runoffs got underway.

Mr. Warnock recognized the onslaught coming his way and quickly released an ad previewing the attacks, suggesting Republicans would even claim he didn’t like puppies.

“I love puppies!” he declared as he stroked one in the commercial.

Mr. Warnock, though, did not have any such line at the ready on Sunday night to defuse Ms. Loeffler’s unrelenting portrayal of him as a radical. Instead, he sought to change the focus to his rival’s wealth and the stock trades she made while serving in the Senate this year.

Mr. Warnock said Ms. Loeffler “used her advantage as a U.S. senator to make millions on a pandemic while playing it down to the people she was supposed to represent.”

Mr. Warnock emphasized his commitment to unity — “I have worked my whole life to pull people together,” he said — and sought to reassure voters in what is still a right-of-center state that he supported police officers.

“Our law enforcement officers lay it on the line every day,” he said, adding that they “will have an ally in me.” Ms. Loeffler, though, did not let up.

“I’m not going to be lectured by someone who uses the Bible to justify division,” she said, referring to Mr. Warnock’s sermon about God and the military. Mr. Warnock responded by accusing Ms. Loeffler of distorting his words for “cheap political points” and said the sermon was about “a moral foundation of everything we do.”

What ultimately may drive the Loeffler-Warnock race, and perhaps both of the runoffs, is whether Republicans’ attacks remind Georgia voters of why they’ve demonstrated a longstanding preference for Republican senators, allowing them to put aside their distaste for Mr. Trump’s conspiracy-mongering.

This may depend in part on how Mr. Trump conducts himself after Dec. 14, when the Electoral College will formalize Mr. Biden’s victory. On Monday, Georgia officials recertified the state’s election results after a second recount affirmed Mr. Trump had lost.

“That strikes me as a pivot point,” said Senator John Cornyn, Republican of Texas, referring to the Electoral College deadline next week. He expressed the hope of many in his party that from that point on the two Georgia Republicans could run expressly on a message of “We need a firewall.”

For now, Mr. Trump’s refusal to concede defeat is denying the two Republicans the opportunity to run on this message; Ms. Loeffler demonstrated that in the debate when she refused to say Mr. Biden had won the presidency, for fear of alienating Mr. Trump and his fervent supporters.

Even if the Georgia Republicans can fully present themselves as checks on Mr. Biden, there are still risks in making Mr. Warnock their singular target. If the attacks have an air of bigotry, Republicans may turn off the coalition of moderates they are trying to win over in the runoffs. Many Georgians across racial lines are proud to claim a New South identity and may recoil from anything that smacks of overt race-baiting.

Further, the anti-Warnock messaging may energize Black voters, who make up approximately 30 percent of the Georgia electorate.

“Democrats have a hard time getting some of their African-American voters to come back when there’s not a presidential race at the top of the ticket,” said Whit Ayres, a Republican pollster. “But African-Americans have never had an African-American Senate candidate to vote for either.”

Jim Galloway, the dean of Georgia’s political press and a longtime columnist at The Atlanta Journal-Constitution, has warned about the risks for Republicans if they make the attacks too extreme.

He wrote in a recent column that the party “crosses a line” when it allows Mr. Collins to claim, as he did last month, that “there is no such thing as a pro-choice pastor. What you have is a lie from the bed of hell. It is time to send it back to Ebenezer Baptist Church.”

Mr. Galloway wrote: “I have been unable to decide which is more disturbing — referring to an African-American man as an “it,” or marking Ebenezer and its congregation as a den of satanic influence. But it is hard to walk either back — and with her silence, Loeffler has acquiesced to both.”

Pressed on this question in the debate on Sunday, Ms. Loeffler insisted she was not turning to racist appeals and, echoing Mr. Trump, said that “there is not a racist bone in my body.” She argued that Mr. Warnock’s beliefs — not his identity — were why voters should be fearful of Democrats controlling both chambers of Congress and the White House.

“What’s at stake here in this election is the American dream,” she said. “This is an attack on every single Georgian who gets up every day to work hard to provide a better life for their family.”

Mr. Warnock hit back: “She’s lied, not only on me, but about Jesus.”

Tags: 2020 election, Black People;Afr
You may also like
Recent News:
This website uses cookies to improve your user experience and to provide you with advertisements that are relevant to your interests. By continuing to browse the site you are agreeing to our use of cookies.Ok