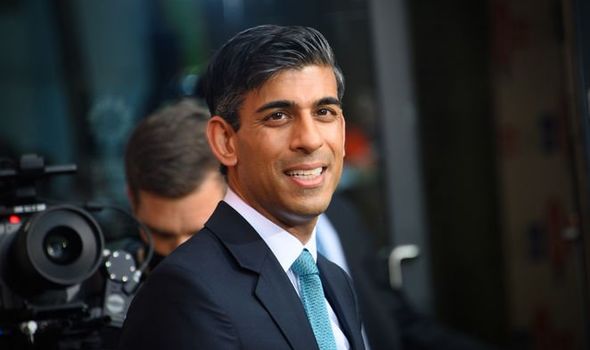 Around £300million distributed under the Coronavirus Job Retention Scheme was returned over the last three months.

Celebrating the news, Mr Sunak said: “We stepped in to help companies when they needed it most.

“As the economy bounces back, £1.3billion in furlough cash has been returned by British business.

“Where companies no longer need the cash, it’s great to see them returning it as they return to profit, and I’m proud to see more and more businesses taking this step.

“But now the British economy is roaring again.

“Unemployment is falling, and job vacancies are growing, we can kick on.

“Our £400billion Plan for Jobs is working – it protected livelihoods, now it is creating jobs, giving people the skills and opportunities they need to succeed.”

Firms have repaid £1.3billion to HMRC since July 2020 through adjustments to claims and the voluntary disclosure service, the figures show.

The Job Retention Scheme has supported more than 1.3 million businesses in total.

Around 1.6 million workers are currently furloughed, the lowest figure since the height of the pandemic in 2020, and around 340,000 people left the scheme – due to end on September 30 – in July.

The Chancellor added: “This Government stepped in to help when people needed it most, supporting nearly 12 million jobs.

“This worked, as nearly two million fewer people are now expected to be out of work in the UK than was feared.”

Treasury officials insist the scheme was the “right thing” to do at the height of the pandemic, when lockdown restrictions were in force.

With the economy reopening, they are now winding down the scheme as employees return to workplaces.

Support is being switched to focus on helping workers acquire the skills that will serve them best in a post-Covid economy.

Despite positive news on repayments, the total cost of the furlough has hit around £68.5billion – and Nigel Morris, employment tax director at accounting firm MHA, expects the total to hit £70billion by October.

He said the scheme was a “staggering amount of money and for the most part good value”, but warned that firms making incorrect claims are likely to face problems.

He told them to pay HMRC back as soon as possible, explaining: “This should help to avoid interest and penalties.

HMRC and the National Audit Office estimate between five and 10 percent of the total furlough money claimed could represent overclaims.”

Meanwhile, the Office for National Statistics (ONS) yesterday predicted around £20.9billion of Governmentbacked loans made during the pandemic will never be repaid.

It revealed that government borrowing fell in August, as the economy rebounded and tax revenues went up.

The ONS said borrowing was at £20.5billion in August, down from £26billion a year earlier – but added that last month’s figure was the second highest August borrowing since records began in 1993.

The data shows borrowing so far this financial year has risen to £93.8billion since the end of March – £88.9billion less than the same period a year ago. As a result of these low receipts and high expenditure, the public sector borrowed £325.1billion between end of March and August.

This is equivalent to 15.5 percent of gross domestic product (GDP), the highest ratio since the end of the Second World War.

Government debt stood at £2.2trillion at the end of August – around 97.6 percent of GDP, which is the highest ratio since March 1963.

However, the figures reveal that spending is starting to fall, dropping £1billion on August 2020 to £79.6 billion.

It was higher than the amount the Government received in taxes, which stood at £61.2billion – £5.3 billion more than August last year – although tax payments were £9.5billion more than in July 2020, as the economy started reopening fully last month.

Debt levels have ballooned amid the pandemic after the Government launched costly support measures to aid households and businesses.

In August, interest payments were £6.3billion – £2.9billion higher than 12 months prior.

The ONS said: “Recent high levels in debt interest payments are largely a result of movements in the retail prices index to which index-linked gilts (government bonds) are pegged.”

Isabel Stockton, research economist at the Institute for Fiscal Studies, said: “The ONS estimates that nonrepayments will total £21billion, which would be just over a quarter of the £80billion loaned out.

“This is a big number, but not as big as feared by the Office for Budget Responsibility, whose 2021 estimate was that £27billion would not be recouped.

“The precise size of last year’s historic spike in borrowing is not all that important.

“What matters more is the strength of the eventual recovery, whether current strength in tax receipts persists into future years, and whether the rises in income, corporation and National Insurance tax announced since March are implemented as planned.”