The Republican senator who is leading negotiations for his party on a bipartisan infrastructure plan says Republicans have nothing to lose and much to gain in cutting a deal with the president. 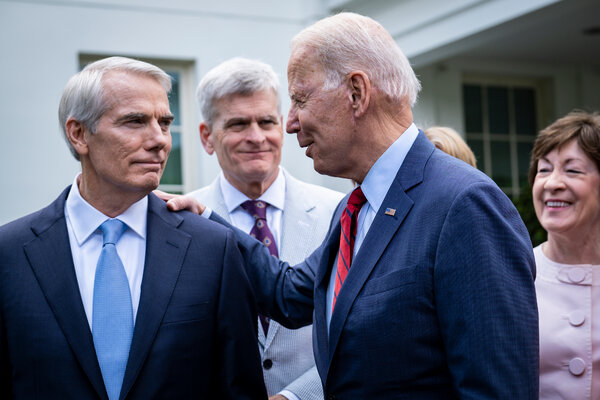 WASHINGTON — Senator Rob Portman, Republican of Ohio and a three-decade veteran of Washington, helped lead the bipartisan negotiations that produced an infrastructure deal that has been endorsed by President Biden. But that may have been the easy part.

Now, it will be up to Mr. Portman and his colleagues to write the bill, set to provide nearly $600 billion in new federal spending, and shepherd it through the narrowly divided and deeply polarized House and Senate to Mr. Biden’s desk.

Mr. Portman is uniquely positioned for the role he is playing. A seasoned operator in Washington, he served for more than 20 years in the House and has been in the Senate for a decade, with stints in between as President George W. Bush’s top trade official and then his budget chief. He is also retiring, in theory freeing him from some of the political strictures that bind many of his Republican colleagues.

Yet the task is still difficult. With five Republicans publicly on board with the compromise, at least five more would need to join all 50 Democrats for the measure to have the 60 votes necessary to advance in the Senate. And looming over the maneuvering is a promise by Democrats not to allow the measure to go forward unless they are also assured that a far more ambitious measure including trillions more in spending — to be muscled through over Republican opposition using a process known as budget reconciliation — will survive.

Mr. Portman spoke recently with The New York Times about his early, negative experience working with Mr. Biden this year, why he trusts the president now and why he thinks Republicans should support the bipartisan infrastructure deal even though Democrats plan to jam through a much bigger bill they oppose. This interview has been edited for length and clarity.

Can you reflect on your personal history with the president?

Well, I’ve known him for a while — I guess a couple decades at least — and I’ve always worked well with him. I worked with him when I was in the House and he was in the Senate on policy issues, including the Drug-Free Communities Act, which was one of my bills he helped on.

I’m not a close friend, by any means, but I have worked with him and I’ve seen where in the past, he has been willing to come together with Republicans and accomplish bipartisan results.

But with regard to my experience in this administration, it wasn’t good, because it was the Covid experience, where we had hoped to work together in a bipartisan basis to pass a Covid relief bill, after he was elected.

We went to the White House and presented a plan and said we wanted to work together to try to find common ground, and literally the next morning, Democrats made the announcement that they were going to pursue reconciliation and were not interested in working with us.

So then why do this if you had this apparent negative experience earlier in this administration?

First of all, I’m never going to give up trying to get bipartisan legislation passed. That’s our job, and I said that after the Covid-19 issue.

Tags: American Jobs Plan, US Politics
You may also like
Recent News: