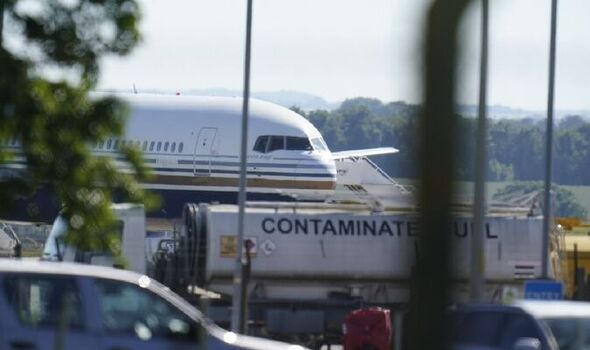 Just two hours before the plane was due to take off, the European Court of Human Rights issued an order to stop one man joining the flight.

This led to the remaining six to make similar claims against deportation, leaving the flight from Boscombe Down military base, Wiltshire, grounded, with no clear answer as to whether it will take off.

The stalling of the flight prompted Boris Johnson to threaten to ditch European human rights laws.

The Prime Minister accused barristers intent on thwarting the government’s plan of “abetting the work of criminal gangs” smuggling people across the English Channel.

A Whitehall source: “It’s a shame that lefty lawyers are exploiting the system to block the removal of those who have no right to be here.”

By this morning, just seven individuals were still scheduled to fly out to Kigali out of the 130 or so initially expected to join the flight.

Mr Johnson warned the government is prepared to pull Britain out of the European Convention on Human Rights if the legal system continues to be used to frustrate government policy.

Ministers already planned to restrict the use of the rules that protect an individual’s right to a family or private life through a new Bill of Rights – but the government had planned for Britain to remain signed up to the convention, which allows claims to be taken up with the European Court of Human Rights in Strasbourg.

Mr Johnson said he had always been braced for “bumps in the road” when he announced the radical plan to tackle the small boats crisis.

He said: “It may take a while to get working properly, that doesn’t mean we aren’t going to keep going.

“I think it is very important we continue to show the people traffickers their business case is going to be undermined and they are cheating people.”

But he said all options are under review to ensure he can enact the policy, including withdrawing the UK from the human rights convention.

“The legal world is very good at picking up ways of trying to stop the Government from upholding what we think is a sensible law,” he said.

“Will it be necessary to change some rules to help us as we go along? It very well may be. All these option are under constant review.”

The UK government struck a deal earlier this year with the Rwandan government to take thousands of migrants who illegally enter the UK.

Security guards at the Hope Hostel in the Rwandan capital said they were ready to process the new arrivals tomorrow.

The plan has been the source of widespread backlash from more than 160 charities and campaign groups, a number of which have launched legal challenges.