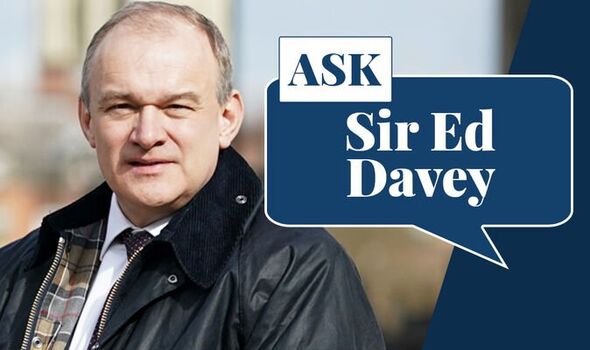 We want to hear what you want to know from the Leader of the Lib Dems.

What would you like to ask Sir Ed Davey? Have your say in the comments section below.

The former Secretary of State for Energy and Climate Change will then be asked what he thinks on a range of issues.

In recent months, Sir Ed has accused the Conservative Government of having “lost the plot on tax”, arguing that it “either doesn’t care or doesn’t get it” when it comes to the cost-of-living crisis.

The Liberal Democrats are now calling for a tax cut to ease the “cost of living emergency”.

Launching his campaign for the May local elections, Sir Ed said the Government’s approach to tax policy is unfair “because it puts the burden on working people, particularly low-paid people”.

He added: “Now, more than ever, they deserve a fair deal, but the rising cost of energy, soaring energy bills, are overwhelming millions of families and pensioners.”