SNP’s Ian Blackford argued that not only Boris Johnson and his Government had not done all they could during the pandemic but they had also not done enough. During Prime Minister’s Questions (PMQs), he argued the Prime Minister had been “dithering and delaying” with crucial decisions during the pandemic. But Mr Johnson quickly shot back the Scottish Government should be thankful for the work the UK Government has been providing, most notably on the roll out of the coronavirus vaccine in Scotland.

Mr Johnson said he was delighted the British Army was helping the SNP roll out the vaccine in the country and it remained one of the clear benefits of the union.

Mr Blackford said: “This is about learning lessons from a Prime Minister who has repeatedly ignored the scientific advice.

“When we called on the Prime Minister to introduce tough border controls he refused.

“When we told the Prime Minister it was a mistake to end lockdown prematurely and push millions of workers back to the office he ignored us. 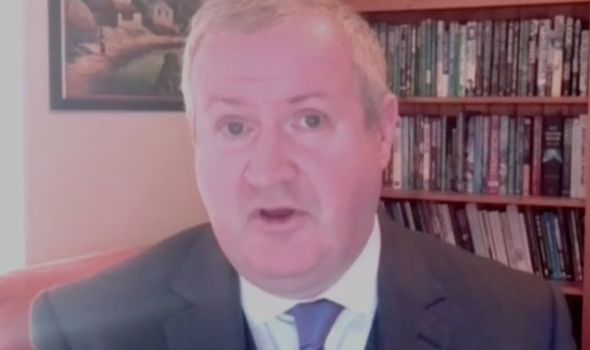 “When we said tough restrictions and full furlough support were still needed he dithered, delayed and left it too late.

“People have been asked to make huge sacrifices by his Government, at least now t.hey deserve financial certainty.

“Tell people straight, Prime Minister, will this UK Government extend furlough, maintain universal credit uplift and finally offer support to the 3 million excluded or will he leave families struggling with uncertainty while he dithers and delays.”

Mr Johnson called on Mr Blackford to reflect on the support the Government is currently giving the whole country, especially Scotland on getting the vaccine out to as many people as possible.

He said: “On the subject of dithering and delaying, I am delighted the British Army is helping the Scottish Government roll out the vaccine fast.

“I think it is extremely important and one of the benefits of the union of the UK.”

He continued: “On his point about the support for people and families across the country, I don’t think anybody could seriously deny this Government has given absolutely unprecedented, and unequal by global standards, support during the pandemic.

“We will continue to put our arms around the whole of the UK through this crisis.”

During the Tuesday evening briefing, the Prime Minister insisted he took full responsibility for everything upon reflection of 100,000 covid related deaths.

He said: “The best and most important thing we can all do to honour the memory of those who have died is to work together with ever greater resolve to defeat this disease.

“I’m deeply sorry for every life lost. What I can say is that the Government will continue to do everything we can to minimise life lost as we go forward.

“And, of course, as Prime Minister, I take full responsibility for everything that the Government has done.