SNP’s Ian Blackford launched into a scathing attack of the British Government, accusing Westminster of “shamelessly gambling” with the economic future of the UK with the threat of a Brexit no deal. The SNP politician pointed out the UK is “two months away” from the deadline set to request an extension, and he urged Foreign Secretary Dominic Raab to consider postponing the end of trade talks with the European Union past December 31. Mr Blackford accused the Government of “threatening to isolate” the British economy in the aftermath of the coronavirus pandemic.

Addressing Foreign Secretary Dominic Raab, Mr Blackford said: “We are two months away from the deadline on approving an extension to the Brexit negotiations.

“Michel Barnier has been clear, the UK has refused to engage seriously on a number of fundamental issues.

“The Government is shamelessly gambling with our economic future with a no-deal Brexit in the middle of a health emergency.

“Why is the Government threatening to isolate our economy at the end of the year during the biggest economic crisis of our time?” 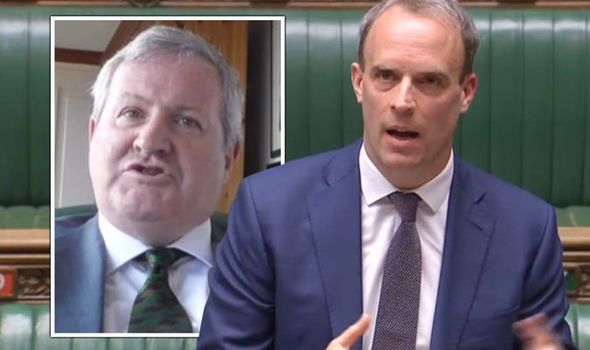 After Mr Raab urged Mr Blackford to take Mr Barnier’s comments at face value, Mr Blackford continued: “What we should be doing is removing uncertainty and we should put a stop to these talks.

“We should make sure that we protect our businesses, and the failure by the First Secretary to rule out a no-deal Brexit should alarm us all.

“The World Trade Organisation predicts world trade may fall by 32 percent this year. The IMF says the world will suffer its worst financial crisis since the 1930s and the OBR warned the UK economy could shrink by 35 percent. That means two million people are at risk of losing their jobs.

“Refusing to admit the inevitability of an extension is not a tough or a clever negotiating tactic. It’s a reckless and foolish gamble. Would the secretary of state embrace common sense and recognise the need for a Brexit extension.

“Show some leadership. Extend the Brexit transition and let us all get on with the job of tackling this crisis.”

READ MORE: Raab ridicules SNP in Brexit row ‘we are doing it as one UNITED Kingdom’

Mr Raab, who deputised for Prime Minister Boris Johnson as he remained at his fiancée’s side after welcoming a baby son on Wednesday morning, rejected any suggestion the British Government will let the coronavirus pandemic force its hand in the Brexit trade talks.

The Foreign Secretary said: “I’m not sure I’d be quite taking the word of Michel Barnier for the state of the progress of the negotiations quite as readily and uncritically as the Honourable Gentleman has.

“Let’s be clear. Our position is unchanged, the transition period ends on December 31. That’s enshrined in law, there’s no intention of changing that.

“What we should do now, given the uncertainty, the problems and the challenges coronavirus has highlighted for us but also for our European friends, as we work extremely close with our German friends and all our European partners is remove any additional uncertainty, doing a deal by the end of the year and allowing both the UK and the European Union to bounce back as we come through the coronavirus.”