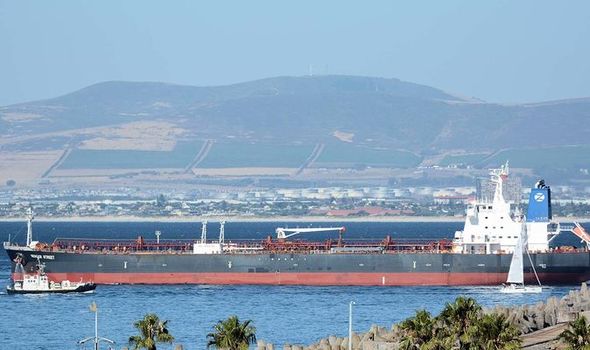 It followed months of heightened maritime attacks between Israel and Iran-backed militia, who are using sophisticated unmanned planes. The attack off the coast of Oman in the Arabian Sea involved a large explosives-laden drone flying hundreds of miles from land, controlled by a camera feed.

The British and American governments back Israel in blaming Iran and are preparing for a military strike against Tehran’s militia.

Israeli intelligence has pinpointed the area from which the drone was launched.

The Daily Express has learned where the terror team is being targeted, but has agreed not to reveal details.

It is believed the “kill or capture” manhunt could involve British SAS specialists and Special Boat Service commandos and members of the Paras.

Electronic warfare specialists equipped to listen in on communications, and a UK forces unmanned aircraft team, are also thought to be involved in the joint UK-US mission.

A former British military intelligence officer said: “Special forces have been concerned about hostage-taking on the high seas for some time but are clearly going to take a more aggressive posture against Iran’s proxies.”

Yesterday, Prime Minister Boris Johnson said Iran “must face up to the consequences” of its actions, adding: “This is clearly an unacceptable and outrageous attack on commercial shipping – a UK national died.”

His warning came hours after the Iranian ambassador to the UK was summoned to the Foreign Office in London in a formal protest.

The as-yet-unnamed British man killed in the attack was part of a three man UK security team guarding the ship, which was hit 152 nautical miles off the Omani port of Duqm, near the island of Masirah, where the Royal Navy has a logistics base.

It is also where the carrier HMS Queen Elizabeth is due to dock on her return trip from the Far East.

Foreign Secretary Dominic Raab said: “The UK condemns the unlawful and callous attack committed on a merchant vessel. We believe this attack was deliberate, targeted and a clear violation of international law by Iran. Our thoughts are with the friends and family of those killed.”

Operated by London-based Zodiac Maritime, part of Israeli billionaire Eyal Ofer’s Zodiac Group, the ship was heading from Dar es Salaam, Tanzania, to Fujairah in the United Arab Emirates, which is regularly used by UK nuclear submarines to carry out crew changes.

A forensics team is set to examine the ship to pinpoint the weapons used and to find links to the perpetrators.

A senior military source said: “We understand that Iran used their militia fighters to test a new drone, with deadly consequences, and which clearly is a threat to all shipping.

“The UK has a large merchant fleet operating in the these waters and the Royal Navy has two bases – protecting UK interests is paramount.”

Israeli foreign minister Yair Lapid said he was in constant contact with Mr Raab and “noted to him the need to respond severely”.

A MoD spokesman said: “We do not comment on matters relating to special forces.”
Source: Read Full Article