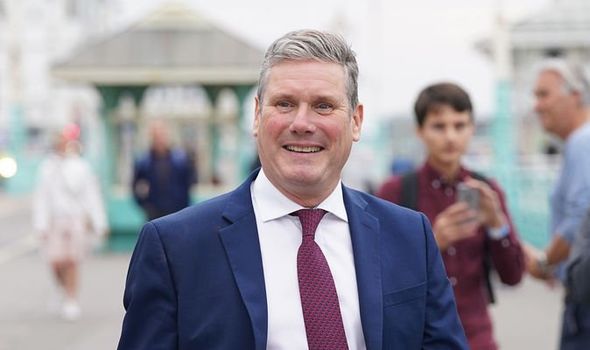 In his first full party conference speech, the Labour leader will say the country faces “a big moment” with difficult choices ahead.

He will insist Labour can win the next election by offering to build both a “strong economy” and a “good society”.

He is expected to tell party delegates on the final day of the conference in Brighton: “I can promise you that under my leadership Labour will be back in business.”

His speech will appeal to the party to unite after bad-tempered clashes at the conference, with sniping from Left-wingers and the resignation of shadow cabinet member Andy McDonald.

In an attempt to stamp his authority on the party, he last night insisted former leader Jeremy Corbyn will not regain the Labour whip in the Commons until he apologies for the surge of anti-Semitic abuse among activists during his time in charge.

Sir Keir said in a television interview at the conference: “The ball is in Jeremy’s court.

“Jeremy was asked to apologise, to take down the post that caused the problem in the first place and to work with us.

Aides say his speech, his first to a fully packed conference hall since becoming leader nearly 18 months ago, will seek to tell voters who he is and set out his values.

A Labour source said: “Keir’s speech will be noticeably different from what you’ve heard from Labour in recent years. It will be more optimistic, more focused on the future, more outward looking.

“The speech will be a demonstration of the way the Labour party has changed. It will be a clear indication that Labour will never again go into an election with a manifesto that isn’t a serious plan for government.”

He will also accuse Boris Johnson’s Tories of shortterm failures leading to the current fuel crisis and soaring cost of living as well as more long-term neglect of society’s needs.

The Labour leader is expected to say: “I see the Government lost in the woods with two paths beckoning.

“One path leads back where we came from, none of the lessons of Covid are heeded; the divisions and flaws that were brutally exposed by the pandemic all worsen.

“But there is another path down which we address the chronic problems revealed by Covid with the kindness and the togetherness that got us through.

“That path leads to a future in which a smart government enlists the brilliance of scientific invention to create an economy in which people are healthy and well-educated – a contribution society in which everyone has their role to play.”

Seeking to distance himself from Labour’s past failings, Sir Keir will say: “Too often in the history of this party our dream of the good society falls foul of the belief that we will not run a strong economy.

“But you don’t get one without the other. And under my leadership we are committed to both.”

He will add: “The questions we face today are big ones. How we emerge from the biggest pandemic in a century? How we make our living in a competitive world?

“The climate crisis, our relationship with Europe, the future of our union – these are big issues… our politics needs to grow to meet the scale of the challenge.”

Labour aides claim their focus group research shows many of their traditional voters in the so-called “RedWall” former heartlands in the North who switched to the Tories at the 2019 general election are beginning to question the competence of the Government.

One senior Labour source said: “The shine is beginning to come off Boris Johnson. The country needs a serious leader for serious times.”