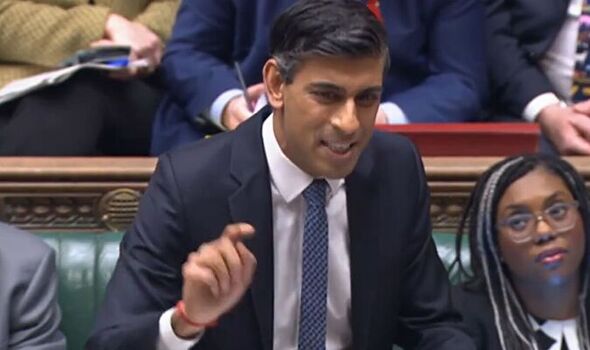 Rishi Sunak branded Sir Keir Starmer as “weak” as he accused the Labour leader of bowing to the demands of the hard left.

The Prime Minister warned the Holborn and St Pancras MP had no control over his backbenchers joining picket lines and accused him of taking orders from union barons wreaking havoc across the UK with strikes.

The defiant attack on the Leader of the Opposition came as Sir Keir echoed demands first made by Jeremy Corbyn for private school tax breaks to be scrapped, and for firm house-building targets to be imposed across the country.

He said: “Winchester College has a rowing club, a rifle club, an extensive art collection, they charge over £45,000 a year in fees.

“Why did he hand them nearly £6million of taxpayers’ money this year?”

Defending his private school background, Mr Sunak retorted: “Whenever he attacks me about where I went to school, he is attacking the hard-working aspiration of millions of people in this country, he’s attacking people like my parents.

“This is a country that believes in opportunity not resentment.

“He doesn’t understand that and that’s why he’s not fit to lead.”

Taking aim at a lack of house building Sir Keir claimed the Prime Minister was “killing off aspiration in this country” by not setting targets for new properties.

He said the Conservative leader should “get tough” on backbenchers failing to back a Bill to impose housing targets, adding “Labour will lend him the votes” to pass the legislation if necessary.

Hitting back the Prime Minister responded: “He talks about toughness, he’s too weak to stop dozens of his own MPs joining the picket lines.

“If he wants to support those hard-working families and show some leadership, why doesn’t he confirm right now that no Labour MPs are going to join those picket lines?”

He added: “It’s the same old Labour ideas, more debt, more inflation, more strikes and more migration. He tells his party what they want to hear.

“I’ll take the difficult decisions to this country and that’s the choice, it’s the politics of yesterday with him or the future of the country with me.”