Immigration was a defining issue for President Trump in 2016. It’s less dominant in 2020, and it is motivating his critics as well as his supporters.

YUMA, Ariz. — It might be seen as a monument to the massive changes the Trump administration has brought to the country’s immigration system. Or it could be seen as a reason people are fighting fiercely to vote him out.

Four years ago, President Trump promised voters he would build a big, beautiful wall. Whether the 30-foot, dark brown, steel fence towering over the sandy borderlands here is considered new, or beautiful, depends on one’s perspective. But it certainly is big.

And it is a tangible example of how radically Mr. Trump has tried to make good on his promise to transform the immigration system, even if most of the changes have little to do with any physical barrier.

In 2016, immigration was among the most defining aspects of Mr. Trump’s campaign. The idea of a border wall and the hard-line policies against asylum-seekers and undocumented migrants that it represented, helped sweep Mr. Trump into the White House. Four years later, the issue has taken a back seat, not only to the pandemic, but to protests over racial equity. The “build the wall” chants that reliably fired up the crowds at Trump rallies in 2016 has been replaced in large measure by rhetoric about “law and order.” 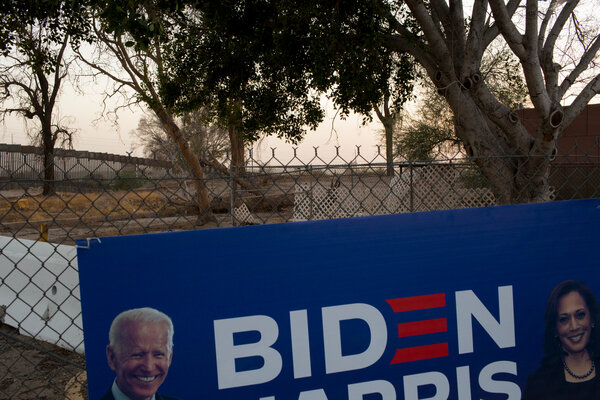 It’s not as if Mr. Trump has shunted the issue of immigration aside entirely. Department of Homeland Security officials recently stood under a stretch of the border barrier in McAllen, Texas to promote the near completion of 400 miles of border wall, most of it replacing or upgrading existing barriers. Immigration and Customs Enforcement officials have held news conferences and purchased billboard advertisements to draw attention to what are typically routine arrests.

And Stephen Miller, the chief architect of the administration's immigration policies, recently outlined a second-term agenda that would include more limits on migrants seeking asylum and further expanding travel bans, blocking entry for citizens from some countries.

Immigration is, after all, the policy where the Trump administration has arguably had the most impact, and it has been an area that keeps his base committed. But, as indicated by his closing rallies — where immigration gets relatively little attention compared to policing and coronavirus restrictions — the issue may not be the strong motivating factor for Trump supporters as it was in 2016. In the key battleground state of Arizona, for example, the voters most focused on immigration are those who are terrified by the prospect of a second term for Mr. Trump.

“Everything has changed now,” said Regina Romero, the Democratic mayor of Tucson whose parents emigrated from Sonora, Mexico, with her older siblings. “But if anything, it has made the public sentiment shift in our favor. People here understand that we need people to come from Mexico to fuel our economy. People here understand more and more that this is about a strength, not a threat.”

Tags: 2020 election, Ille, Immigration
You may also like
Recent News:
This website uses cookies to improve your user experience and to provide you with advertisements that are relevant to your interests. By continuing to browse the site you are agreeing to our use of cookies.Ok