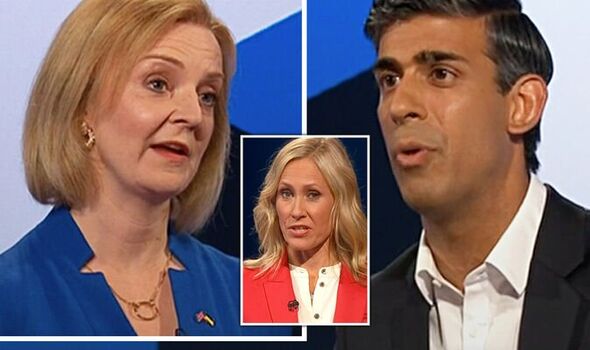 There are only six weeks until Boris Johnson’s replacement will step into Number 10, but the fight between Liz Truss and Rishi Sunak is growing increasingly bitter. CNN’s Luke McGee said the party is “so badly divided it could be forced to call an early general election and hope for the best”.

One MP who joined the House of Commons following Margaret Thatcher’s forced resignation said: “I am worried. Back then the people who stabbed her in the back and the people who remained loyal were such a clear dividing line that defined the party for years.

“Things are even more complicated now and I am not sure these two [Sunak and Truss] can bridge those gaps.”

Tonight, the first head-to-head debate between the two candidates, broadcast at 9pm BBC One, is likely to see the divide increase even further.

Rishi Sunak has closed in on China as both candidates begin to outline their specific policy plans if they become the next Prime Minister.

Mr Sunak has taken a hardline against China, accusing the country of “stealing our technology and infiltrating our universities”, while “propping up Putin’s fascist invasion of Ukraine”.

He also said China is Taiwan and contravening human rights in Xinjiang and Hong Kong, and slammed the Government for supressing its currency to “continually rig the global economy in their favour.

Outlining his policy regarding the world superpower, Mr Sunak pledged to stand up up to China’s “technological aggression” by amending the Higher Education Bill.

The move would force British universities to disclose any foreign funding partnerships of more than £50,000.

Good morning from London. I’m Aliss Higham, I’ll be bringing you all the latest developments on the Tory leadership contest today. Please feel free to get in touch with me as I work if you have a story or tips to share! Your thoughts are always welcome.