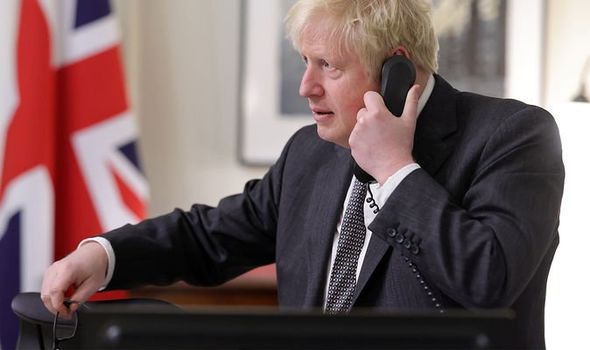 The Prime Minister held talks with Moscow amid increasing fears Russia is plotting an invasion of Kiev.

President Putin has surrounded Ukraine with 100,000 troops in recent weeks, sparking a stand-off with the Western leaders.

Yesterday Mr Johnson visited the region in a show of strength against Russia and to recommit Britain to standing by Ukraine.

Speaking directly to Mr Putin today, the Prime Minister hit out at “hostile activity” on the country’s border.

A Downing Street spokesperson said after the call: “The Prime Minister spoke to Russian President Putin this afternoon.

“The Prime Minister expressed his deep concern about Russia’s current hostile activity on the Ukrainian border.

“He emphasised the need to find a way forward which respects both Ukraine’s territorial integrity and right to self-defence.

“The Prime Minister stressed that any further Russian incursion into Ukrainian territory would be a tragic miscalculation.

“The Prime Minister underscored that, under NATO’s open-door policy, all European democracies have a right to aspire to NATO membership. This rightfully applies to Ukraine.

“He also reiterated that NATO is a defensive alliance.”

Downing Street said the call lasted about 45 minutes in total.

Tensions between the UK and Russia have been at rock bottom since 2018 when Sergei Skripal, a former Russian military officer and double agent for the British intelligence agencies, and his daughter, Yulia Skripal, were poisoned by spies sent from Moscow.

However, in the call today, No10 said Mr Johnson and Mr Putin welcomed recent bilateral communication on issues like climate change, Iran and Afghanistan.

“They agreed to apply this spirit of dialogue to the current tensions in order to find a peaceful resolution,” the official added.

The Kremlin has painted a different picture of relations, with the country’s ambassador warning relations between London and Moscow are currently “close to zero”.

It also ridiculed British politicians for their “stupidity and ignorance”, hurling more scorn at the West after President Vladimir Putin accused Washington of trying to provoke war.

The US has sent about 2,000 troops to Poland and Germany this week and roughly 1,000 more who are already based in Germany will go to Romania.

The White House says the extra military is a safe-guard against Russian aggression.