President Trump shrugged off the warning from the intelligence agencies, officials said. 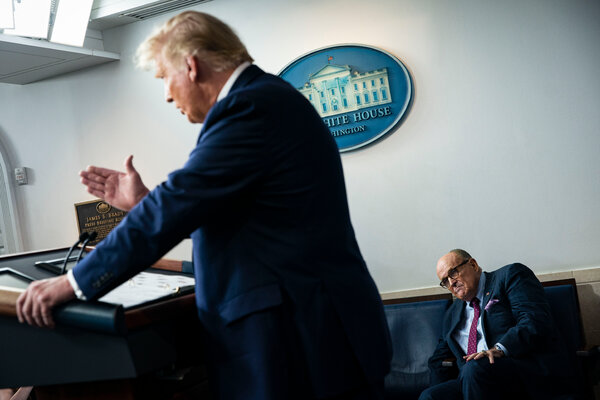 The agencies imparted the warning months before disclosing publicly in August that Moscow was trying to interfere in the election by taking aim at Mr. Biden’s campaign, the officials said. Mr. Trump and Mr. Giuliani have promoted unsubstantiated claims about Mr. Biden that have aligned with Russian disinformation efforts, and Mr. Giuliani has met with a Ukrainian lawmaker whom American officials believe is a Russian agent.

Robert C. O’Brien, the national security adviser, presented the warning about Mr. Giuliani to Mr. Trump in December. Two former officials gave conflicting accounts about its nature. One said the report was presented to Mr. Trump as unverified and vague, but another said the intelligence agencies had developed solid and credible information that Mr. Giuliani was being “worked over” by Russian operatives.

Mr. Trump shrugged it off, officials said, but the first former official cautioned that his reaction could have been colored in part by other information given to him not long before that appeared to back some of Mr. Giuliani’s claims about Ukraine. The specifics of that material were unclear.

Mr. Giuliani did not return requests for comment. The Washington Post reported the intelligence agencies’ warning to the White House earlier on Thursday.

The warning, the second former official said, was prompted by a meeting on Dec. 5 between Mr. Giuliani and Andriy Derkach, a Ukrainian member of Parliament who takes pro-Kremlin positions. The Treasury Department recently labeled him “an active Russian agent for over a decade,” disclosing that he maintained ties to Moscow’s intelligence services as it imposed sanctions on him in September.

Mr. Giuliani’s campaign to undermine Mr. Biden has focused on his anticorruption efforts in Ukraine while he was vice president and his son Hunter Biden’s work there on the board of a gas company owned by an oligarch widely seen as corrupt.

Tags: 2020 election, Mueller report;R
You may also like
Recent News: