Trump named several major cities, including some not experiencing violent protests, as candidates for federal forces. 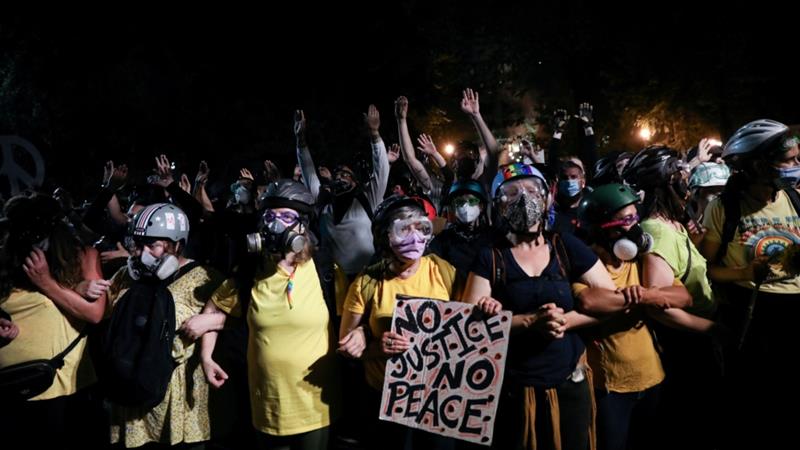 President Donald Trump on Monday said he plans to send law enforcement personnel to some large United States cities, as a federal crackdown on anti-racism protests including use of unmarked cars and unidentified officers that appear to be in military gear, in Portland, Oregon angers people across the country.

“We’re sending law enforcement,” Trump told reporters at the White House. “We can’t let this happen to the cities.”

State and local leaders in Oregon, as well as members of Congress, meanwhile, have called for Trump to remove Department of Homeland Security from Portland. They were deployed prior to July 10.

“They’ve been there three days and they really have done a fantastic job in a very short period of time, no problem,” Trump said misstating how long the federal law enforcement officers have been in the historically liberal city to quell protests. “They grab a lot of people and jail the leaders. These are anarchists.”

Trump and members of his administration have blamed “Antifa”, a loosely organised grouping of left-wing protesters and activists who have been active in sometimes-violent protests since the alleged murder of George Floyd by Minneapolis police officers on May 25.

While the violence has sometimes been deadly, the overwhelming majority of suspects belong to right-wing groups.

Trump has previously threatened to designate Antifa, which is short for “anti-fascists”, as a “terrorist organisation”, due to alleged violence caused by the “group”.

The tactics that the Trump administration are using on the streets of Portland are abhorrent,” Portland’s Mayor Ted Wheeler, a Democrat, said in an interview with CNN.

Oregon has sued the federal government for the actions of unmarked officers in the city. Governor Kate Brown has asked the officers to leave.

This political theater from President Trump has nothing to do with public safety. The President is failing to lead this nation. Now he is deploying federal officers to patrol the streets of Portland in a blatant abuse of power by the federal government. https://t.co/PdlZkmW0mQ

Despite a national outcry over the tactics, Department of Homeland Security officials on Monday said they would not back down and would not apologise.

“We will maintain our presence,” Cuccinelli said.

Tags: enfo, federal, law, send, TO, Trump
You may also like
Recent News:
This website uses cookies to improve your user experience and to provide you with advertisements that are relevant to your interests. By continuing to browse the site you are agreeing to our use of cookies.Ok